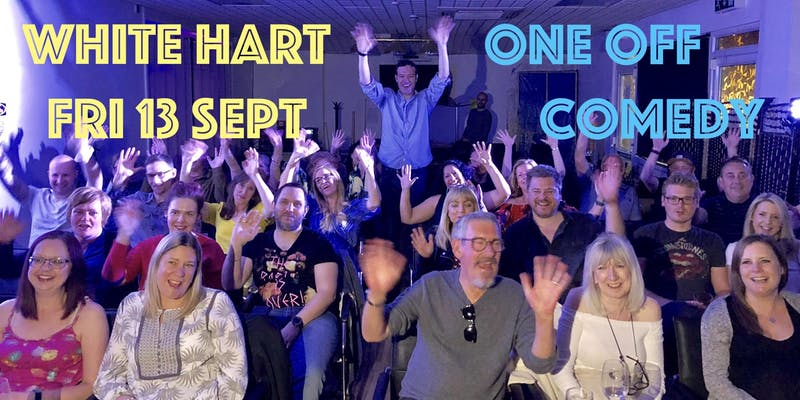 Time to let loose!!
For the first time ever, One Off Comedy Nights is bringing its funniest performers & most outlandish storytellers to the White Hart, Andover!!!
As part of a sellout tour, Michael Hackett, a rising star on Edinburgh & Adelaide Fringe festival, is joined by exciting pro acts from the UK circuit. Sharing dark stories, embarrassing moments and the kind of banter you’d only share with your friends, there’s a reason it sells out. Laughing to crazy antics you can’t see on TV, a one-off special, the night’s guaranteed to be electric.

About our headliner:
Michael Hackett is a Manchester born comedian who performs stand-up around the UK, Europe and Australasia.
He’s a regular at the Edinburgh Fringe, hosted Octoberfest to 2,500 people and released a bestseller book ‘Gobsmacked!’
Previous to this he trained as a dentist, quit French clown school and joined the circus. After a trapeze accident broke his left testicle, however, he finally picked up the mic.

Ric Wharton
Winner of Paramount Comedies UK funniest student.
A hilarious northerner from Newcastle, he’s been performing since 2006 and is now the official UK tour support for Live at the Apollo comedian Larry Dean.

Trev Tokabi
As winner of Comedy Store gong 2015 and London’s Up The Creek 2014 and 2015, Trev is a solid act. With a laid back delivery, Trev’s humour draws on all sort of life experiences. From silly to quirky, smart to clever, and even outright stupid, Trev is loved by many. Adding to this some off-beat dark humour for the more adventurous, it’s no wonder Broadway Baby declares “Trev has the best humour”