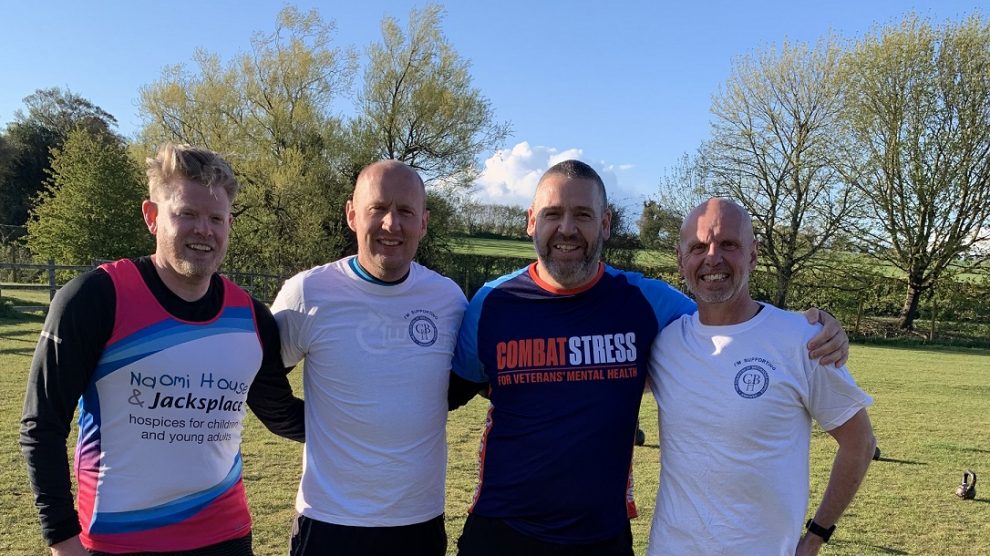 On July 10th, 4 local men are undertaking the challenge of a lifetime.  With an average age of 46, Derek Wright, Martin Ruddick, Kevin Rush and Craig Mellor are all committed to running the 66 mile coastline of the Isle of Wight in just 12-16 hours.  All 4 are members of Bootcamp Andover and have utilised the Lockdowns of the last 12 months to take on some running.  Together they are trying to raise funds for three very worthy charities and each has a story to tell.

Martin and Craig are raising money for the local Countess of Brecknock Hospice (CoB).  Martin says “it was over 20 years ago when I first experienced the exceptional care offered here when my mother-in-law was admitted, originally for respite care.  Sadly, less than a week later she lost her long battle with Cancer, with her family by her side.  Since then I have lost family, friends and colleagues to Cancer, that have spent their last few days in the hospice.  Knowing there is somewhere they will receive the best of care and be treated with the upmost dignity and respect is comforting at a most difficult time.”

Craig adds that his wife, Karen, was diagnosed in 2019 with Cancer and despite bravely battling this horrible disease for 2 years she finally succumbed in January this year. “Throughout the later stages of her illness she and our family were supported by the Countess of Brecknock Hospice.  Although Karen remained at home, during some dark difficult times the staff of CoB were there 24 hours a day providing their incredible support.  These people do a remarkable job in very difficult situations and rely on outside support to deliver their outstanding level of care when its most needed.”

Derek claims he is not a runner “I am not built for it and to be fair, I absolutely hate it! Over the first Lockdown I ran a marathon to see how far I could go but the second Lockdown saw me tear my calf and I have had to take it easy since, not managing any further than 6 miles. So, signing up for this 66 mile trek with over 2,000m of climb seemed like a sensible idea?!  To keep me motivated I wanted to raise some money for a local charity and there are few more worthy than Naomi House Childrens Hospice. They provide expert hospice care to more than 600 life limited and life threatened children, young adults and families from Central Southern England.”

Weighing in at 19st Kevin says “during the Lockdowns I have eaten my weight in cake, several times over, and decided it was time to make that change.  I love a challenge and enjoy testing myself in unlikely situations so running 66 miles seemed like it ticked all the boxes.  I am running for Combat Stress, the UK’s leading charity for veterans mental health.  With such an army community around Andover, and knowing some individuals first hand that have benefitted from their service, I know they are charity very much in need of funds that offer life changing, and often life saving, work”

All 4 men know that the physical challenge is only half the battle, as the psychological challenge is equally as tough and that’s the before the possibility of rain, wind and darkness!  Together they have raised nearly £5,000 but if anybody would like to contribute see below;