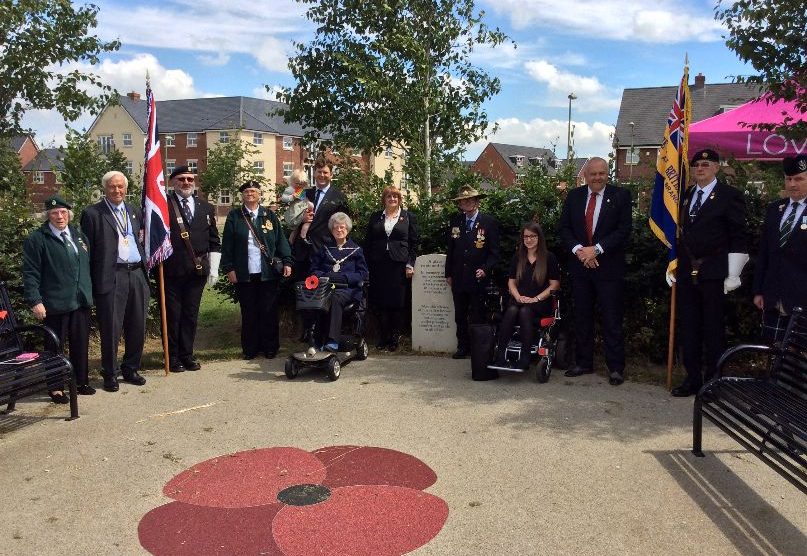 On Saturday 26 June a Garden of Remembrance was officially opened on Augusta Park at East Anton by Cllr. Nick Matthews , who represents the Roman Ward area.

It was Cllr. Matthews’ idea to build the garden, situated at the aptly named Poppy Park ,after it was discovered that the MoD had left a sum of money in an account when building commenced, to finance a project for the community living on Augusta Park. At that time there was a large presence of Military Personnel living on the development.

Cllr Matthews contacted APCA (Augusta Park Community Association) with his idea for a Remembrance Garden and with APCA also paying a considerable amount into the project the plans began.

The Garden was completed just before the first lockdown last year but because of Covid restrictions the ceremony to Bless the Garden had to wait until now.However, that time has allowed the wild flower turf to bloom, making it look a tranquil and welcoming space to sit and reflect.

The Blessing Ceremony began at 10.40am with a recording of Test Valley Brass playing “Castelle Coch”

Cllr Matthews shared a few words about how the Garden had come into being . He thanked everybody who had made the Garden a reality including the MoD, APCA who both helped with the design, Mandy Taylor and Maeve Novak for providing delicious homemade cakes and refreshments (which were enjoyed by 30 invited guests after the ceremony ) and David, Sarah and Kevin and the Love Andover team for the live broadcasting on the day and for all the support they have always given to many local charities.

He then handed over to Rev Chris Bradish, Vicar of Andover’s Parish Church, St Mary’s who said a few words about having the poppy as a symbol of remembrance and how that came about He then read” In Flanders Field”, a poem written by a Canadian Lieutenant Colonel during WW1. He then proceeded to read a Prayer of Blessing and added that he hoped the garden would bring peace ,solace and comfort to everyone who visited there.

Cllr Jim Neal then recited “We Shall Not Grow Old” which was followed by Louise Porter, a member of Test Valley Brass Band who played “ The Last Post” and after two minutes silence played Reveille to signal the end of the silence.

A local Cub Scout Austin Scratchley. stepped forward and recited Kohima Epitaph “When you go home Tell them and say For your tomorrow We gave our today” It was a splendid performance by Austin and he deservedly received a round of applause.

The inscription; on the monolith were written by Cllr Matthews and started with the words; A PLACE TO SIT AND RELAX. In memory of all our servicemen and women who have died in defence of our freedom. May the silence of our fallen heroes be deafening to our enemies, whilst providing comfort and pride in all of us.

The ceremony concluded with a recording of a Navy March . a Grenadier March and a RAF March being played during which refreshments were served.

Among the guests at the ceremony were Andover Mayor Barbara Long and three women Veterans- Margaret Styles and Sandra Cawley who both served in Germany(WRAC) and Carol Connor who is a Navy veteran and served in Scotland in 1966.

Love Andover was broadcasting live from the ceremony. Usually they mark Armed Forces Day with a big show in Vigo Park but unfortunately, due to Covid, this wasn’t possible this year.