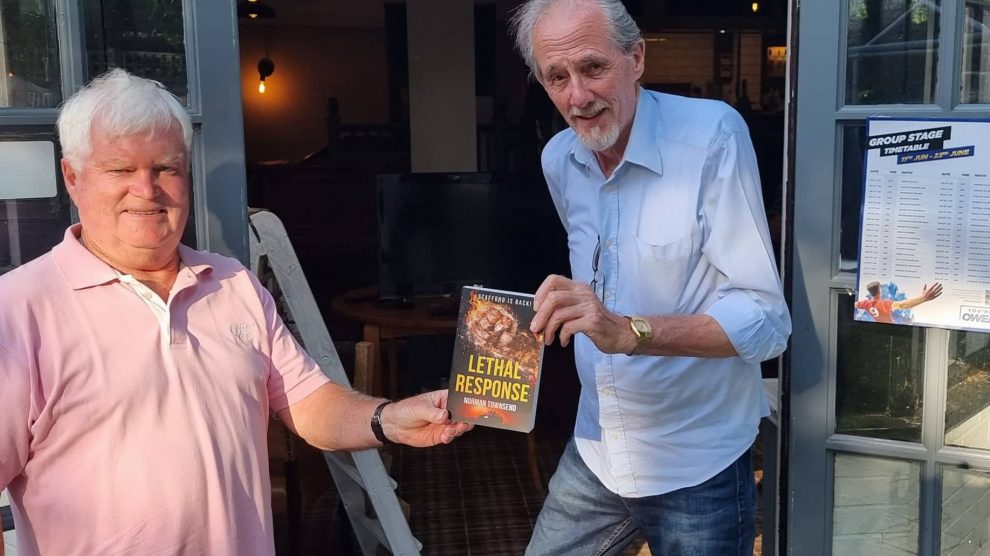 Weyhill is the location of media helicopters who ‘clatter deafeningly’ above the criminals’ compound.

Those are among the opening words of Andover author Norman Townsend’s new book, ‘Lethal Response’.

Local author Norman’s debut book, ‘Trashed’ was written in 2018 from ‘part experience’ and ‘part imagination’, having worked in the waste removal industry some years ago,

His new book, available now, is based around protagonist – former military man – Major Paul Stafford who found out his small recycling company could beat the odds to win a contract to run five Hampshire waste tips.

Stafford found himself up against a ruthless criminal gang who have relied on the tips as cover for their frightening catalogue of villainous activity.

Lethal Response tried to conclude Trashed’s epic and bloody battle of law enforcement being destroyed by a drug smuggling and a people trafficking ring.

Author Norman from Andover received excellent reviews on Amazon for his debut book and says, “So many people wanted a sequel. I had time over lockdown to write a sequel, so here it is”.

Intimating that a third in the series may be on the way, Norman told Andover Radio, “Trashed sold very well.  Hampshire people seemed to enjoy the fact that is was local and takes place up and down the M3 corridor taking in Andover, Winchester, Southampton and names places that people in Hampshire will know”.

The ‘Trashed’ follow-up in 420 pages follows ‘Paul Stafford’s kind of justice’ and evolves as witnesses are being killed before they have chance to testify.

Talking at a monthly ‘Book Club event’ at the Queen Charlotte pub in Andover, Norman said, “Major Paul Stafford is desperate enough to protect the people he cares about and bring crime lords to justice.  Whatever it takes.

“The final battle in Trashed is at a compound in Weyhill and when I stared this second book, I wasn’t sure how to start it, so I started it from the aftermath of Trashed.

“The protagonist Paul Stafford realises that all they (the criminals) have done is halt the foot soldiers, none of the boss men, so the battle in Lethal Response is to trap the leaders.”

Both ‘Lethal Response’ and ‘Trashed’ are available at Waterstones, WH Smith, Amazon and more gives thanks to people like local man David ‘Elvis’ Wiltshire (pictured) for their support.

Father’s Day Sunday 20th June 2021 – How will you celebrate?
Free Ice Cream from The Cafe Bridge