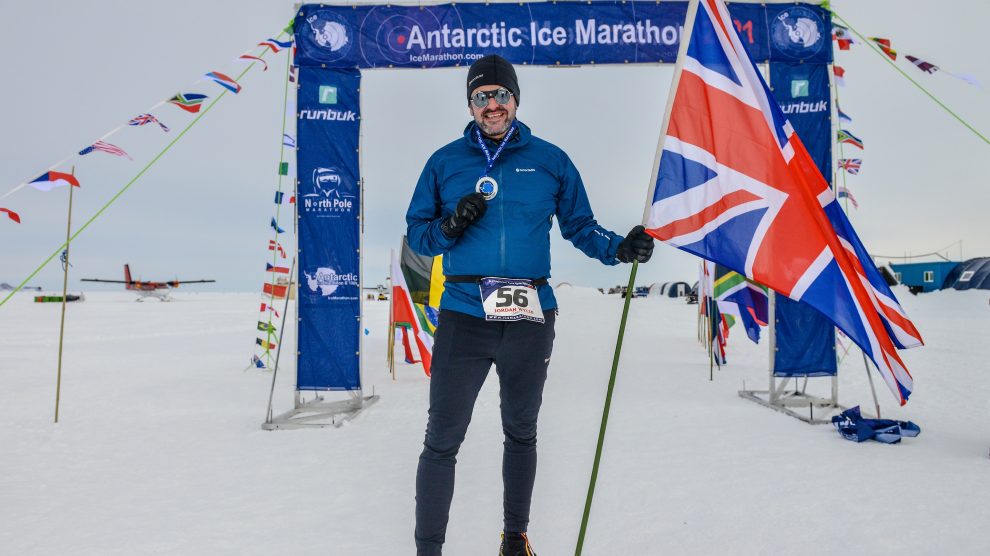 Despite the world being put off all forms of travel by continuously changing rules and regulations, British adventurer and Channel 4 Hunted star Jordan Wylie remains determined in his quest to complete his polar mission of running marathons in the worlds coldest places.

After nearly 3 weeks of flights, quarantines, PCR tests, a library of documentation in his back pack and patiently waiting for weather windows to open from Antarctic storms, the intrepid former soldier and army cadets national ambassador made it to the Union Glacier in Antarctica this week where he ran 26.2 miles on the coldest, windiest, iciest, highest and driest continent on the planet. The white continent is currently also the only continent in the world with zero covid cases right now. Jordan who has already competed ice cool marathons in Siberia (Russia), Yukon (Canada), Alaska (USA) and Jökulsárlón (Iceland) said:

“To accomplish a marathon at the end of the earth on in this magical place was an incredibly tough challenge, it was punishing from start to finish and unforgiving throughout. I had also carried an Achilles injury for the last 12 months which was really painful and caused me problems from around 9 miles in, there was no way I was quitting though, it would of punished me mentally for the rest of my life having come this far.

“It was a great privilege to experience this majestic land that most people will never make it to, I feel very grateful for this incredible opportunity thanks to my incredibly kind sponsors at The Eton Harris Group.

“Many people asked me why I would want to travel to so far for an adventure in the current climate, my answer to them is that one thing I have learnt in the last 18 months is tomorrow is never promised and we must always embrace the here and now. Be safe, get your vaccines, follow the rules but keep living life to the full as you never know what’s around the corner…”

Jordan will now prepare for his next extreme marathon which will be even colder when he heads for the North Pole in April 2022 to continue his mission. If you can’t wait till then though to see Jordan’s adventures, you can catch him back on screen in January on Channel 4 when Celebrity Hunted returns to our screens once again for what promises to be the best series yet!