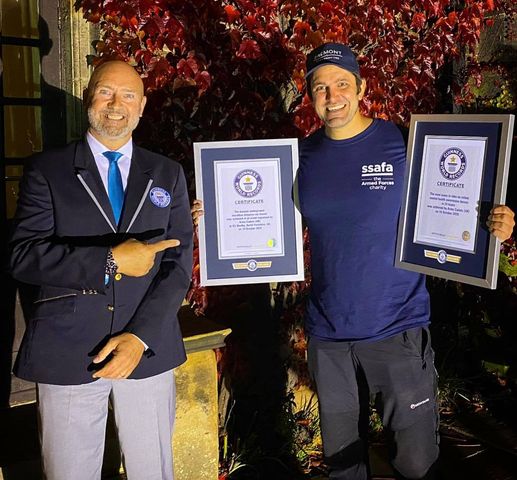 Jordan who is the U.K. national ambassador for the Army Cadets ran a marathon in the deepest polyhalite mine in the world, which was 1000 metres below the surface at ICL Boulby in North Yorkshire. The project which was called “Beneath The Surface” which was put together to raise awareness of mental health, as we never know what is going on inside a persons head beneath the surface, saw 2 new Guinness world records set.

One for the deepest ever underground marathon in history and one also for the largest ever mental health awareness session delivered online, which saw over 1500 cadets take part whilst Jordan and his team was under ground raising awareness and funds for 3 charities, Young Minds, SSAFA and Frontline Children.

The team which included fellow national ambassador Sally Orange and miners from ICL Boulby ran in helmets, head torches, safety goggles and face masks in complete darkness for 42.2 Kilometres. They raised nearly £4000 in 24 hours and was is perhaps more impressive is Jordan who is in the middle of paddlebording around Great Britain had been at sea for 76 days before stepping off his paddleboard to raise awareness on mental health day and had done no training at all.

Jordan is now back in the Irish Sea and will continue paddling towards Scotland and hopes to finish his current world record expedition by February 2021.

We were able to catch up with Jordan and he told us “This was one of the toughest things I have ever done physically, my body was not prepared for this as I have been stood on a paddleboard for nearly 3 months. To be honest if it wasn’t for it being such an important cause there is no way I would of ran without doing any marathon training at all but I had a duty to do and I was part of a team that worked incredibly hard on delivering this project, so I had to run.

It was an incredible yet brutal experience and I would like to dedicate my part of the run and my contribution to the world records to 13 year old Chantelle Jones, a young aspiring cadet who tragically took her life 2 weeks ago as a result of online bullying at school. It breaks my heart and I am determined to do more to fight for change on this subject, my condolences and thoughts are with Chantelle’s family at this terribly tough time”