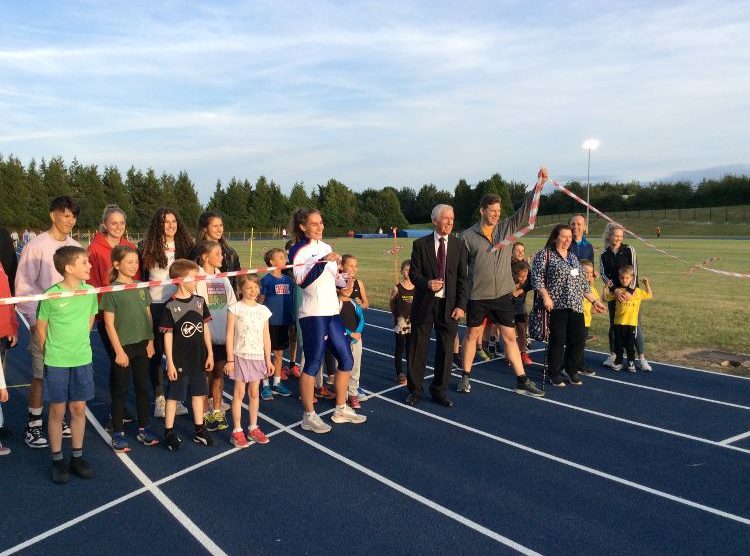 On Thursday 23 September Andover Athletics Club, based at Charlton Sports and Leisure Centre, held an Open Evening to showcase the sports training that they have on offer to children over the age of 8. The children were invited to try out Long jump ,high jump, running and vortex throwing (junior Javelin throwing) guided by the Club’s coaches.

From 9 years old they can go on to the Quad Kids training scheme and can enter competitions in the Wessex Quad Kids League and the kids Cross Country Running League. Also from this age the young athletes can compete in the Hampshire Sports Hall League.

The coaches at the Club are all volunteers. Heather Boyd has been a coach to the U11s group for 25 years.

Coach Tom, who has been at the Club since he was 11, was demonstrating the javelin to some enthusiastic youngsters and encouraging them to throw ( under his supervision of course!) There are two Javelin groups, the Javelin Throw Development Group and the Javelin Throw Performance Group who perform at County level and train twice weekly under the guidance of coach Mark Bradford.

The Long Jump was also a very popular choice for children wanting to try out a new sport. They were shown the correct position from which to take their jump and how the judges measure the length.

Ernie Chambers, who has coached youngsters in the High Jump for many years at the Club was also very popular with the children. Some of them had tried this sport at school but he was showing them the best positions to jump from and how to land safely thereby enhancing their confidence. Local boy Noah Wincott who is only 12 and already trains at the Club, is currently the best high – jumper in the UK for his age group. His very impressive record is 1.62m. An athlete to look out for in future Olympics.

Special guest of the evening was Holly Mills, who at 21 is a GB heptathlon athlete.She qualified for this year’s Olympic Squad by coming 26 th in the qualifiers. Under normal circumstances the top 36 athletes are selected but this year due to Covid only 24 were included in the Squad so unfortunately Holly missed out by two places The heptathlon consists of seven disciplines – Hurdles, High Jump, Shot, 200m Sprint, Long Jump, Javelin and 800m Run.

Holly is from Andover . She has been training at the Club for the last 13 years with coach Heather Boyd’s excellent guidance and still trains there. Holly has now become a full time athlete since leaving university and is training 6-8 hours a day, 6 days a week. She is hoping to be selected to take part in next year’s Commonwealth Games in Birmingham. Holly was bombarded with questions from the youngsters and took time to answer them all and pose for photos with her young fans.

The evening culminated in a ‘cutting of the ribbon to open the refurbished 400m running track.

If you or your child is interested in any of the training or services offered by Andover Athletics Club they can be contacted on 01264 362997 or on Facebook The Club is based on West Portway in Andover, SP10 3LS

Geekiness Comes To Andover
A Pig-tastic fundraiser in Thruxton