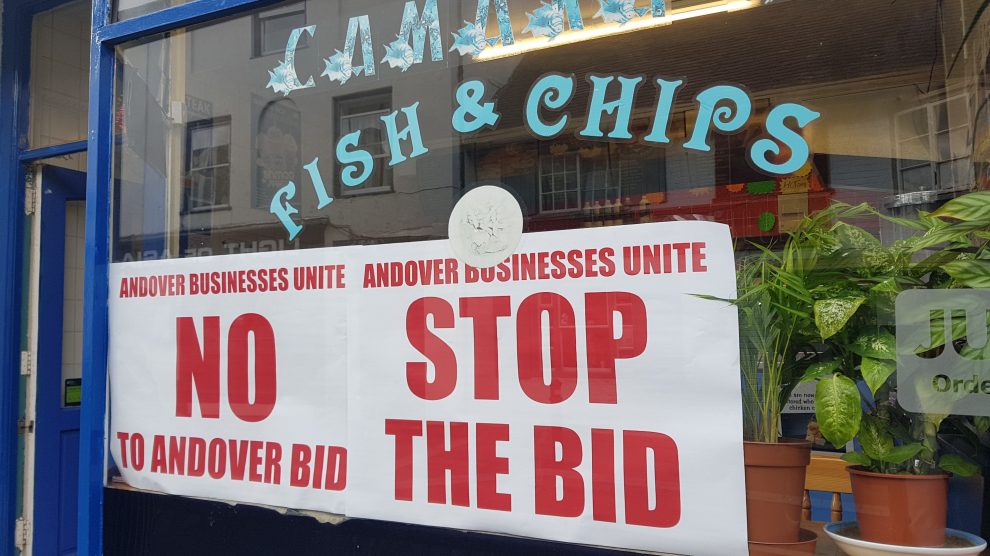 Over the past month, local companies around the High Street have been voting on whether they want Andover to be a ‘BID’ area.  Today’s result was a success for supporters of the BID, but the results were exceptionally tight.

Announced on the Test Valley Borough Council (TVBC) website just before 1pm today, the authority said, “51.1percent voted in favour of the BID and plans will now be put in motion to set up a BID company.”

However, it is claimed by some businesses that as the council had 13 of the 137 votes the results of 70 for and 67 against, this meant that council influence “swayed the vote in their favour“.

On the Love Andover Facebook page, Darren Davies commented, “The Council lied. [They] said that business would decide but it has been the Council that has pushed this through with their 13 votes”.

Local business owner Graham Walters, owner of Test Valley Models in the Chantry Centre is not happy, “This just proves how morally and judicially corrupt Test Valley Borough Council are. And they’re corrupt to the core.

“How can they justify pushing this through when 67 businesses (58% without council votes) were against the BID?

“It’s a resounding ‘no’ from businesses in this town.  We do not want a BID.”

At the time of writing, Test Valley Borough Council have promised Love Andover that they will provide a response to businesses’ apparent anger and they will provide comment that some of the 13 votes cast were on behalf of TVBC-owned car parks.

Mr Walters told 95.9FM Andover Radio that whereas their use of votes “may well be legal, it is certainly immoral“.

Before the month-long ballot, business owners have been concerned that the BID will simply provide services that are the responsibility of the council.

In their media release earlier today, the local authority said, “Following the announcement that Andover BID will go ahead, the council has reiterated that it has no intention of withdrawing services that it currently delivers in the town centre. These range from street cleaning, to grounds maintenance, to emptying litter bins. This will ensure that the BID will be able to spend its money on new projects.”

An enforceable 2% levy on around 250 businesses’ rateable value will now be added to their rates bill and the new BID company will decide how the money is collected and how it should be spent.

Local campaigner Joanne Coole commented online, “I’m disgusted with TVBC and the BID team. This should have been about what the businesses want, not TVBC!”

Kevin Farrer from International Furniture has previously told Love Andover that he will consider selling his furniture store on Black Swan Yard, if the BID vote were to be successful.  Yesterday he told 95.9FM Andover Radio, “I have taken the view that with the BID looming, and if a yes vote goes through, its going to cost me more with this stealth tax, so I can’t keep spending money to encourage people into the town.

“[The BID] will cost me an additional one thousand pounds a year.  No BID is going to save the High Street, it’s the hard working retailers that will save it between us without bringing in someone else in that’s going to charge us more money, I don’t get it.”

With a BID company, which is likely to be incorporated as a Limited Company at Companies House, with a maximum of 20 directors, Lisa Armstrong, the chair of the Andover BID steering group said, “I am delighted that the town centre businesses have voted positively for the Andover BID. This positivity is fantastic and this will be the energy we will use to create the new business and appoint directors on to the board.”

The BID area is expected to come into effect in April next year.

The ballot results, which were returned by Test Valley Borough Council Chief Executive Roger Tetstall can be downloaded by clicking here.