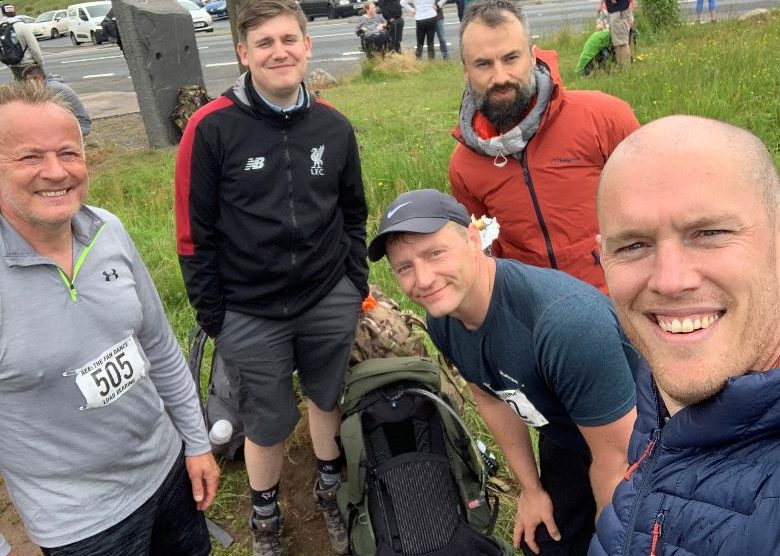 The team at Graham & Co Estate Agents, based in Andover & Whitchurch, have recently embarked on a gruelling trek through the Pen-y-Fan area of Wales, covering 24km and following in the footsteps of highly trained SAS soldiers.

The team of 7 from Graham & Co, including directors Wayne Turpin and Guy Somerville and their team members Tristan Wheatley, Bex Cox, Dion McArthur, Ross Beeden and Nick King, have been training since last year to prepare for the Fan Dance race, which was originally set to happen in January 2021 but was postponed due to the pandemic.

They set off on a day hike up the famous Pen-y-Fan peak in the heart of the Brecon Beacons in Wales on 4th July 2021, in order to raise funds for the Andover Food Bank which is supported by the Trussell Trust.

In 2020 and 2021, food banks have been in high demand whilst many families have suffered as a result of the pandemic and lock down restrictions. The Andover Food Bank provides emergency food packages for families in crisis and has been a lifeline to many people in the community. The Graham & Co team would like to help the Food Bank continue their work supporting those in need by raising as much as they can.

Pen-y-Fan is the tallest peak in South Wales and stands at 886m (2906ft) above sea level, presenting a challenging trek through the Welsh landscape. Whilst the hike can be completed in many ways, the team at Graham & Co are committing to take the most challenging route, which is a 24km SAS selection challenge called the ‘Fan Dance’ race through the collection of peaks that surround Pen-y- Fan and involves a lot of up-hill climbing. According to the Fan Dance Challenge website, ‘The infamous march is the world’s oldest Special Forces test and is used as the first major indicator of whether a candidate has the physical and mental aptitude to complete the legendary Selection course.’

Support the Andover Food Bank and Guy, Tristan, Dion, Ross, Wayne, Ben and Nick from the Graham & Co team, by making a donation for the Trussell Trust on their fundraising page which is still open for donations: https://donate.giveasyoulive.com/fundraising/graham-and-co-team-fan-dance-race- sas-challenge