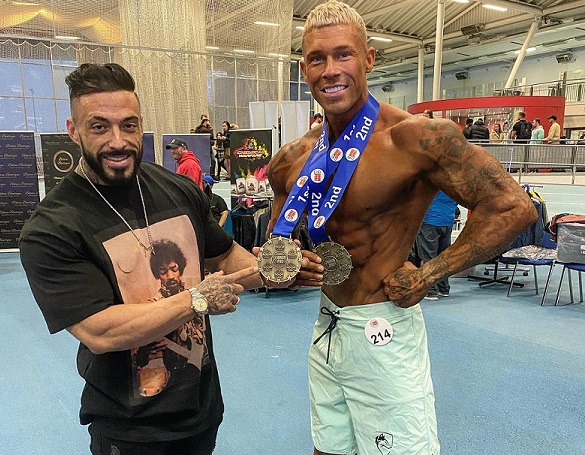 We caught up with him after the competition to learn more about his journey to success. Ash explained: “I have been in preparation for this show for the last 15-16 weeks, ever since I decided to enter this prestigious European bodybuilding show. My coach Jamie do Rego and I decided to go for this one as we wanted to compete against the best amateurs in Europe, to see how we compared and what work needs to be done to have a good chance of hitting my first goal which is to win my class, win overall and get my IFBB pro card.

My class comprised of 17 absolutely incredible physiques, I went out with my head in the zone and did my best. We did our walks and then call outs; straight away I was in the first call out which instantly meant that I was in the top six of the class. We did comparisons and I was moved to the centre, which usually means winning and I stayed there the whole time. We returned for the results and I placed first so now I am the IFBB 2 bros pro shows Ben Weider European men’s physique champion”

Ash went on to compete in the next class up and came second with only half a point between him and the winner, who had won the British finals 2 weeks before the show, so he was happy with that result too.

Ash completed his day with a photoshoot with one of the best photographers in the world, Christopher Bailey, who is well known for capturing images of famous bodybuilders and the MR Olympia stage photos in Vegas, which he described as “an amazing experience.”

Ash is now preparing for one more show this year; The Muscle Works Mecca Classic, which takes place on the 7th November in Watford, where he hopes to win. Ash concluded “I hope to win and go into the overall to battle it out with the winners of each class.”

Ash is a personal trainer and online coach based at Pure Gym in Andover, working with clients both online and in 1-1 personal training sessions.