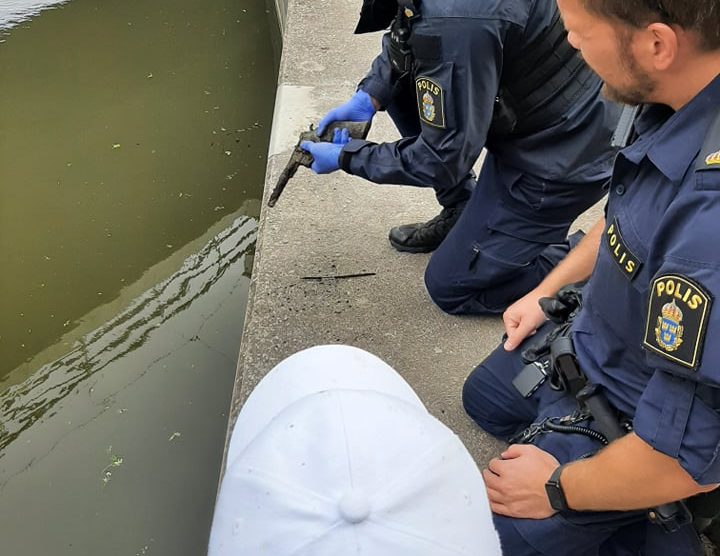 A man from Andover has found what may be the gun that killed the Prime Minister of Sweden.

Paul D’Arcy of Pilgrims Way moved to Sweden earlier this year and his magnet fishing hobby may well have found the weapon which shot and killed Prime Minister Olof Palme in 1986.

51-year old Paul’s hobby is ‘magnetfishing’ – using special magnets in rivers and canals to attract metallic objects thrown into or lost to the murky waters.  While taking part in his hobby on Thursday (19th August 2021) in his new home of Stockholm, Paul uncovered something surprising.

Magnet fishing is a recent trend, using a magnet attached to a rope to ‘see what you get up’. Many magentfishermen find useless scrap metal objects, but are often praised for their cleaning of the waterways.  Paul refers to the past-time as a “21st Century Hobby”.

However, Thursday’s haul was ‘a shock’ says Paul who moved to Sweden to live with his girlfriend in January this year.

The find, thought to be a Smith & Wesson .357 Magnum revolver, was made in the Bällstaviken river in the west of Stockholm.   It is the same calibre of gun used to assassinate the Swedish Prime Minister on 28th February 1986.

Paul exclusively told Love Andover, “When I heard the gun was never found, I knew my search was just the beginning. And if it’s in the river, I would do my best to find it”.

The Andoverian’s find is being investigated by local police.

Paul moved to Sweden from Andover in January this year to live with girlfriend Eva Kallai with whom he was dating in 1989, but reignited the flames of love last year during lockdown.

Paul, a website designer by trade who also teaches young people with learning disabilities how to do his hobby said, “No lockdowns or travel bans would keep us apart”.

Since finding the weapon, he and his girlfriend have been the centre of much media attention in Sweden.  Following the find he told the Swedish Expressen newspaper, “I was totally shocked.

“It was heavy already when it was on the magnet. But when I took it off, I realised, based on the weight, that it was not a toy. Then I put it down.

“I did not want to play with it because it was a weapon.”

Olof Palme was assassinated on Friday 28th February 1986 at 11:21pm.  He was fatally wounded by a single gunshot from a Smith and Wesson revolver while walking home from the cinema with wife Lisbeth.  It is understood that the couple did not have bodyguards with them on that fatal evening.

Christer Pettersson was convicted of his murder in 1988 after having been identified as the killer by Mrs Palme, however he was acquitted on appeal.

Paul says that the police were alerted and a patrol quickly arrived at the scene to take care of the weapon.  Paul D’Arcy and partner Eva could see that the revolver had been in the water for many years. Paul said, “I think it has been there for 20-30 years”.

The revolver is being investigated by Police in Stockholm. In the videos of the haul posted below, you can hear police initially suspect the weapon may be a ‘toy gun’. Police continue to investigate.

Paul and his story can be found by following MagnetMan on social media or visiting his website, magnetman.se.

Paul’s site has lots of guidance and information for people seeking to find out more about this ‘21st Century Hobby’.