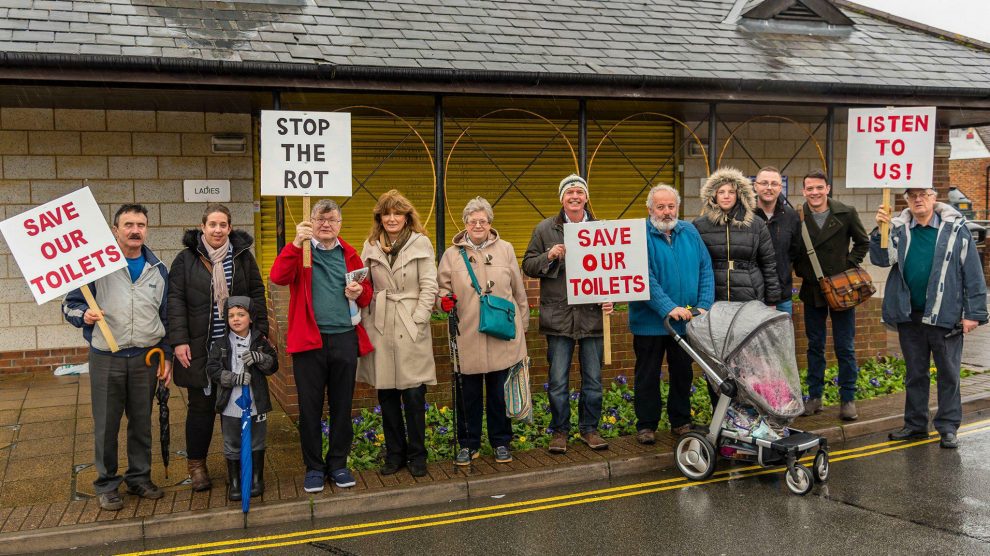 Local businesses who are part of the ‘community toilet scheme’ are supporting a ‘Save Andover’s Public Toilets’ petition.

Venue owners in the town are claiming that since the closure of two public toilets, they are experiencing increased misuse of their facilities.

An online campaign took to the streets this weekend to collect signatures to prevent the demolition of the toilets at George Yard car park.  Organisers aim to collect 1,500 signatures.

The petition was started by husband and wife team Joanne and David Coole who wanted to follow-up the outrage expressed by veteran campaigner Councillor Iris Andersen.

“We went to a TVBC planning meeting where they voted to close the toilets. At the meeting they tried to stop David from talking, claiming that this should have been discussed at a previous council meeting – but on investigation, we can’t find any record of there being such a meeting”.

Mrs Coole is keen to point out, “This campaign is really questioning whether the authority followed the correct processes”.  She continues:

It is understood that TVBC pay participating businesses £1,500 per year to be members of the scheme.

“We’ve spoken to many cafes who are not in the scheme and some are complaining about recent increased misuse of their toilets by members of the public who are not purchasing anything from them”, says Mrs Coole.

“The Redbridge complained to us about drug abuse, vandalism and graffiti since they joined the scheme.”

Love Andover spoke with management at Bridge Street pub but they were unable to confirm whether they would remain as part of the community toilet scheme.

A few of the businesses supporting the petition include:

Many were concerned about the “coach loads of people” who arrive throughout the year, particularly in the summer, and where they will go to take a comfort break.

The council have previously said that the decision to close the toilets was a ‘result of persistent problems with drug users’ and ‘in the interest of public safety’.  Many online commentators reject this argument, claiming that the council should not be dictated to by drug users, but concentrate on solving the drug problem instead of moving the issue to cafes and pubs.

On the Facebook group Spotted in Andover, resident Lionel Whyton says, “If Andover has such a huge drugs problem, why not address that first instead of closing the public toilets. I am disgusted by the council’s action.”

Citing the existing scheme’s difficulty for wheelchair users and parents with prams, Mrs Coole adds, “I went to Costa the other day and it was not only really busy, but also the walkway to the toilets between chairs and shop fittings was so narrow it would make it really difficult for wheelchair users or with those with prams to get through without making a fuss.

“Disabled people, or anyone for that matter, really don’t want to cause a fuss when needing to spend a penny.

“Using a pub causes problems too.  Going through a pub while lugging pram upstairs is also an unacceptable option.”

Mrs Coole has used the Freedom of Information Act 2000 to request information from Test Valley Borough Council about the amount of drug abuse taking place in the George Yard block.  An official response received today did not answer the question, simply stating: “Statistics were not used to determine that drug abuse was taking place”.

TVBC has previously told Love Andover, “The demolition of the building will improve the overall look of the area and create additional car parking.”

Mrs Coole adds, “We need to get 1,500 signatures on the petition by mid-April and my husband and I plan to come out on Saturdays to collect more signatures.  So far there hasn’t been one person who has refused to sign the petition.”

David Coole is due to question councillors at a Council Cabinet Meeting in Romsey on 14th February, the same meeting where it is understood councillors are being whipped into line to authorise the demolition of the George Yard toilet block.

1,500 signatures are required to ensure the matter is debated at a Full Council meeting in April. Interested parties are being encouraged to sign the petition online here: