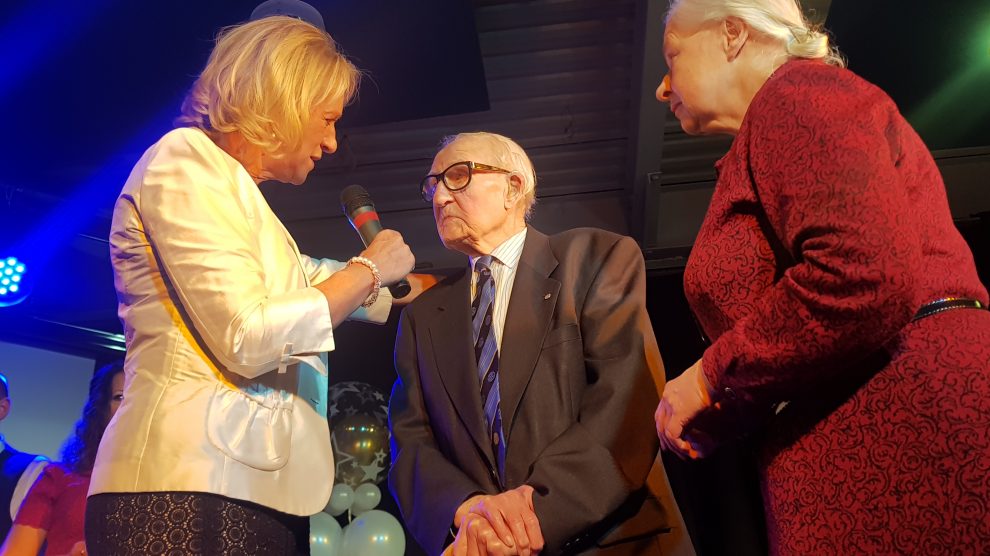 The fourteenth annual event which celebrates exceptional people and unsung heroes in the town was at The Lights and highlighted some of the inspiring and often selfless actions of Andover’s most generous individuals.

Mr Holloway received a special “well done” from host Sally Taylor from BBC South Today. The ‘true gent’ has 71 years of committed service at his shop P Squires which is due to close.  Retiring at the age of 96, Mr Holloway looked in good health and with good humour joked, “The council really should lower business rates”.

Mr Holloway received a standing ovation after accepting his accolade.  A campaign continues online to give the former bomber pilot the Freedom of the Town.  Online Steve Burbidge from Burbidges Bakery on Weyhill Road wrote, “He had to learn by touch the dash board of his Lancaster bomber blind folded, to fly in the dark, 100’s of switches and dials – a real man, total respect and well done Sir, what a life story.”

Other winners on the night included Claire and Tony Noakes from the Abel Foundation, a charity set-up to support families with children suffering from Mitochondrial Disease.  They set up the charity after their son Abel was diagnosed with the illness aged just 9 months.  Tony and Claire were frustrated with the lack of support and knowledge of this disease; the couple – with baby Abel – also received a standing ovation from the amassed guests.

10-year old Nuno Porter-Bessant was also commended for spending two years growing his hair in order to raise money to make wigs for children with cancer.  Nuno’s efforts saw him donate 13 inches of hair and raise a total of £1,075 for charity.

The event was sponsored by David Mellor Family Jewellers, owner Christine Mellor said, “Sponsoring this event is our way of saying “thank you” for the support we’ve had, and indeed continue to receive, from the town. We are proud and delighted to be associated with this event and all it stands for.”

“It is a pleasure to acknowledge and reward so many truly inspirational and selfless people who go above and beyond for their community”.