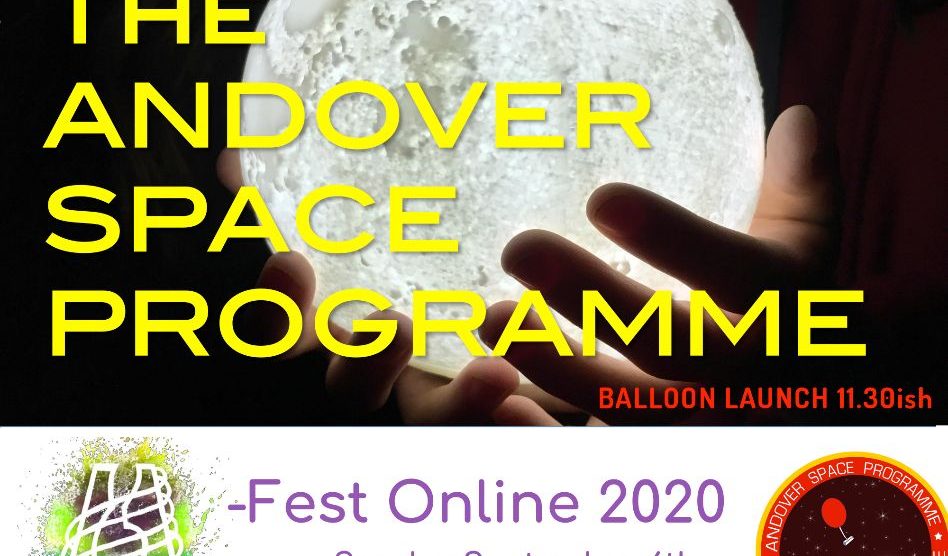 Andover Space Programme is an idea devised by Tom Mansfield for Chapel Arts Studios who offered him a 2019 Artist In Residence project ‘CAS:AIR There’s a Bigger Picture Out There’. CAS:AIR is an annually repeating programme focused on engaging local people in the arts. Mansfield, worked with Andover Young Carers and the Picket Twenty Fillies (W.I.) to name, design and construct a spacecraft using a high altitude weather balloon.

As part of this year’s Andover youth festival A-fest, the weather-balloon propelled spacecraft will be launched to an altitude of at least 20km above the earth, creating a moment of joy, pride, hope and play for all. Carrying a payload of messages from Andover young people and their families, as well as cameras to film its 3hr journey, Mansfield will attempt to recover the craft and its footage for a display at Winchester Science Centre.

The launch of the Andover spacecraft is weather dependent but scheduled for 11.20am on Saturday 6th September. You may like to opt-in for SMS updates from Andover Space Programme at www.chapelartsstudios.co.uk/space​. Andover Radio 95.9FM is also covering the event. Anyone can witness the show by going to​ ​www.tinyurl.com/A-Fest2020​.

Previously attended by 3,000 young people, it is the first time the popular festival will be virtual, enabling young people and their families to enjoy the youth festival from the comfort of their homes, from 11 am to 3 pm on YouTube. There will be updates on the progress of the GPS trackable space-craft throughout the day.

The event will be a mixture of live streaming and films. Cat Randle co-organiser says ​“Online events allow people who struggle due to distance and disability to perform and attend.”

Maija Liepins CAS Engagement Manager says “W​ ith the CAS:AIR space project, CAS Curator Susan Francis wanted to connect people in Andover to their hopeful ideas of a ‘bigger picture’, making connections nationally, globally and beyond. The internet too is also such a symbol of connectivity. Because making space for the needs and visions of young people is important we will also be using the Instagram hashtag #casAIRspace to invite Andover young people to “think big” about art in Andover for young people.”

CAS:AIR There’s A Bigger Picture Out There and the resulting Andover Space Programme by ​Upstart Theatre’s Tom Mansfield​ is supported by the following project partners: ​Test Valley Borough Council,