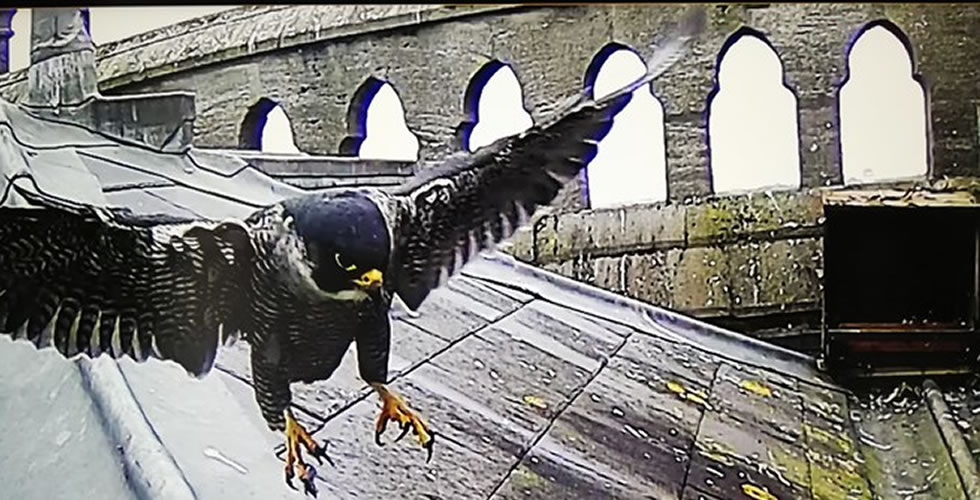 A close-up look at Andover’s resident falcons is looking for a boost to the roost.

The Peregrine Falcons which nest on the very top of St Mary’s church tower have had three chicks this year, all of which have successfully fledged.

The screech of the endangered birds can be heard across the town, but only a select few get to watch their progress.

Julie Rhodes from Upper High Street hair salon ‘Studio R’ contacted St Mary’s in the summer to suggest a crowdfunding campaign to raise funds for a high quality camera so that people can see the growth and development of the chicks.

Karyn French, Operations Manager at St Mary’s Church told local radio station 95.9FM Andover Radio, “We want to install a professional bird-cam to be streamed online with a picture quality that’s high enough and recording so everyone can see the birds’ development.”

A crowdfunding campaign has been launched to buy, install and pay for licencing for a ’30-times optical zoom lens, infrared, audio and 4 hours of playback’.

The campaign which launched only a couple of weeks ago is seeking to raise just over £4000 has reached over £350.

Karyn adds, “These are beautiful birds and we want to show the residents of Andover -and the rest of the world – these amazing birds. Currently we have some pictures, but they are not of great quality.

“Julie who runs Studio R approached us to spearhead some fundraising, and this is something that all the town can get involved in. Its really an exciting thing to happen in Andover and something that Julie’s very passionate about.

All donations will go towards the camera and feed, allowing everyone to get to know these fantastic birds better.

The Peregrine population in the UK has plummeted since the 1960s, mainly due to human intervention and the use of pesticides in the food chain. ‘Pigeon fanciers’ are also known to shoot or poison birds of prey.

People wishing to donate to the cause can pledge their support on an exclusive Just Giving page called Andover Peregrines.

Businesses who wish to support the activity can get publicity and credits for their support by emailing Karyn here.