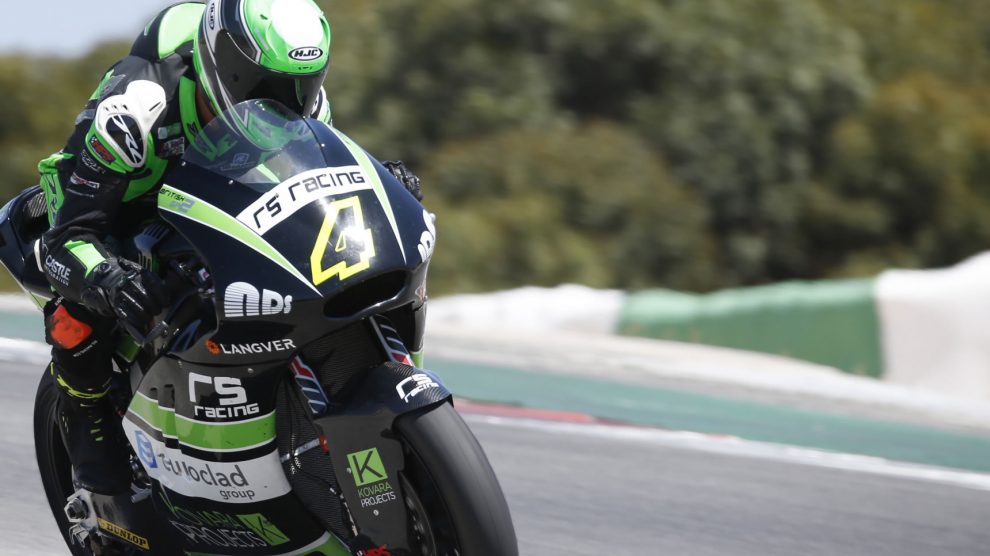 Andover’s Jake Archer has just completed the second round of the Moto2 European Championship at the Autodromo Algarve.

The former Moto3 champion was racing in the highly competitive championship as part of his pre-British Superbike GP2 preparations.

A few days ago he finished 17th and 16th in Estoril in his first ever races in the championship, which boasts several former and current World Championship racers. The Kovara Projects by RS Racing Team made the 200-mile drive south to the southern Portuguese circuit last Thursday.

After the positive free practice sessions on the track Friday Archer was ready for the two qualifying sessions starting at11:15 Saturday morning. The first session was interrupted early when a red flag came out in the opening minutes. At the end of the delayed session the number 4 had clocked a best time of 1:50.702.

The team made some adjustments to the bike for the second session and Archer began to improve further. He knocked a tenth off his lap time early on before going on to finish the session on 150.063 seconds. This meant he would line up 19th on the grid.

The first of the 17 lap races was just before lunch. Jake made a positive start to the race. He then lost touch with the riders in front before going on to cross in a lonely 16th place.

Race two saw Jake made a fantastic start as he moved from 19tth on the grid to 15th coming out of the first corner. Clearly enjoying his racing Archer fought a race long battle with Nicolas Czbya. Archer narrowly missed out on his first championship point after he lost the grip in his tyres in the final few laps and came home 16th again.

Jake Archer said, “It was a shame we just missed out on the final point in race two but the whole experience has been fantastic. I have lined up against some world class riders for the last four races which is an experience I will never forget. In race one I had to concentrate hard because I spent quite a bit of the race on my own. Race two was very different and I was in a battle from the very first corner.

“I would like to thank Peter Lucey of Kovara Projects who has been a huge support again and the bike prepared by Ryan Saxelby was perfect as always.”

Jake thanked people from Andover for their continuing support on local radio station 95.9FM Andover Radio at the weekend.

Jake and the team now return from Portugal to finish preparations for the GP2 Moto2 class of the British Superbike series which starts on the weekend of 7th to 9th August 2020 at Donington Park.

It’s the law, Face coverings must be worn when shopping.
Villagers rally round after Thruxton Thatch Fire