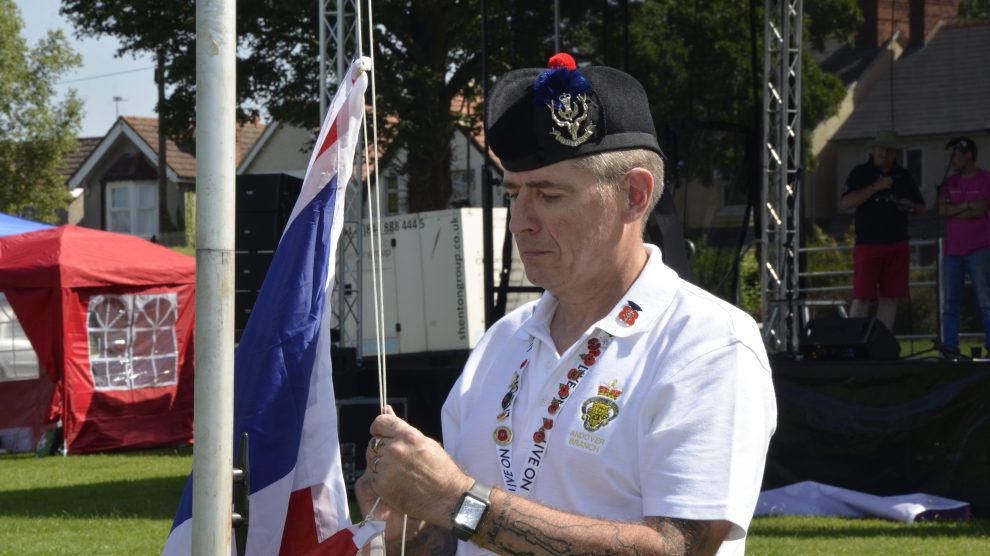 A thanks to our military veterans was given with due ‘reverence’ at this year’s Andover Armed Forces Day.

Local girl Suzanne Poole and local group The Covergirlz were showstoppers at yesterday’s event which attracted large crowds despite the unfavourably hot temperatures.

18-year old Ms Poole put on a breath-taking performance on the main stage while the park was drenched in temperatures of 32 degrees. Ms Poole who has a LAMDA Gold Award for acting gave performances of ‘Nessun Dorma‘ and ‘Ave Maria‘ which left crowds at Vigo Park sat in awed-silence embracing her exceptional vocals.

Suzanne’s performance was one of a number of musical treats for visitors to Vigo Park yesterday who came to experience the event to help to connect our military and civilian communities.

The girls told Love Andover, “It was a glorious day and we were thrilled to see so many familiar faces in our home town.

“We loved watching the crowd bopping along to vintage classics and getting ‘In The Mood’ while it was too warm to ‘Bake a Cake’, thankfully the audience didn’t ‘Hit the Road Jack’ and stayed to hear our music from the wartime era.”

The young people from Vigo Primary School Choir raised a huge cheer from the audience at both of their performances on the day. The Pride of Andover Award winners aged 8 to 11 enchanted the park with their impressive harmonies, led by Mrs Weymouth, where lyrics were performed with Makaton hand movements (sign language) they had learned to allow deaf people to understand the songs.

RAF technician Matthew Marshall and local singers Lizzie Cullen and Alex Krupa also performed on the day. Alex, who is well-known to the town’s live music scene released his debut album Drunk on the Speakers on Friday.

Singer SACT(T) Marshall said, “I loved the opportunity to play for an event that means so much to me. As a serving member of the British Armed Forces it was an honour to represent myself and serving members alike. As a budding solo artist it was a great platform to showcase my music to such a great audience”.

Young visitors played ‘splat the rat’ with the Royal Engineers, made their way through a Virtual Reality maze and learned about the work of 22 Engineer Regiment from Perham Down. A paintball range was also on offer thanks to the Royal Engineer regiment which has the Freedom of the Test Valley.

The Army Historic Aircraft Flight (AHAF) put a Saunders-Roe Skeeter helicopter on display and local businesses like Andover Leisure Centre and energie Fitness had movement activities for the kids, many taking on the kettle ball challenge from the Anton Mill Road fitness centre.

On stage, Deputy Lieutenant of Hampshire Mr Timothy Weale and Mayor of Andover Cllr Richard Rowles both gave their thanks to military veterans at the event which started 13 years ago as ‘Veterans’ Day‘. Among the former service personnel who received a special thanks from dignitaries and the people of Andover were Sqn Ldr Jim Neal (RAF), Rifleman Richard Noyce (Royal Green Jackets), C/PO Barry Allen (RN) and Col Clive Ward (REME).

Maurice Sweeney from organisers Andover Radio said, “We really must give credit the many local businesses and our three councils who helped finance this £16,000 event.

“From L A Security Group to S&J Catering, who kept bar prices at a low on the day. There were also businesses like International Furniture, Stannah and David Mellor Family Jewellers who made sure this year’s event happened through their financial support.

Former ‘Sapper’ Mr Sweeney continues, “And, of course, we must thank the effort of our local regiments like 22 Engineers and the Army Air Corps. I want to give a special thanks to Major Roj Gurung from Army HQ and Mr Timothy Weale DL for their part in this year’s event.”

From AHAF, Squadron Leader Neil Knowles who presents Andover Radio’s weekly discussion programme The Word said after he commentated on the Army Air Corps’ Apache Fly-past, “It’s a special day for me being a veteran, it’s treated with a bit of fun, a bit of learning and a bit of reverence as well, today has had the perfect balance.

“Most veterans were hiding under a bushel a bit, so I had to go around and ‘beat them up’ to get them on stage. It was like getting the grouse going after the Twelfth. We’re British aren’t we, and we don’t like drawing attention to ourselves.

Aircraft fan Mr Knowles added, “The whole idea of Armed Forces Day was to show our appreciation to regulars, reserves, cadets and veterans. Not like Remembrance Day when we think of the lost, today we are thinking about that ongoing sacrifice and celebrating that sense of community.

“The Armed Forces are a massive part of the Andover community. Not just the veterans groups themselves, but specific veterans groups like the Gurkha community; and all of that goes towards making what Andover is today.”

The Apache fly-past of the familiar AH-1 gave a bow to visitors below as it circled Vigo Park in salute. The fly-past was arranged with Army Air Corps at Middle Wallop.

Displays in the main arena came from the ever-popular Southern Jacobites Pipe Band, who opened the event following giving respect to the raising of the Union flag and the National Anthem. Their own performance was followed by the heavily-dressed Paladins of Chivalry who gave commentary to their improvised and un-choreographed broadsword-slashing medieval reenactment, dressed in a full 14th Century replica of thick woollen clothing, chainmail and armour.

However, the Team Green Rockets drew the largest crowds around the 60m square arena as young people aged 4 to 14 performed stunts through fire and ramps on motorcycles. The Rockets Children’s Motorcycle Display team again suffered the temperatures of the day wearing bike leathers, while wowing crowds with adrenaline-filled stunts and dare-devil jumps.

A full gallery of images from The Rockets is available here (photos: Paul Scicluna).

The 4th Dorset Living History Museum also captured the attention of visitors young and old with their replica of a mobile HQ field office scenario, one which made its way to the beaches of Normandy almost exactly 75 years to the day. Visitors were able to experience how the British Army communicated and get hands-on experience with communications equipment of the day and a range of deactivated weaponry.

Members of the Andover Branch of the Royal British Legion (RBL) were out in force yesterday, the charity showcased some of the work they do locally which supports members of the Armed Forces, veterans and their families. A spokesperson for the RBL said, “We provide lifelong support with a wide range of services and support. From employment and financial support to expert guidance and physical and mental well-being”.

National charity Veterans in Action (VIA) provided some hands-on ‘Bushcraft’ activities for visitors at the bottom end of Vigo Park this year while raising awareness of their 2020 challenge. The charity based locally at Redenham Park are seeking to raise funds to build a Veterans and Families Retreat to help military families readjust to civilian life and help those who have suffered the effects of war or military service.

The team from VIA were on-hand first thing in the morning to help co-ordinate the set-up of the day on Vigo Park.

More images from Andover Armed Forces Day official photographer Paul Scicluna (and others) are below.

Hosts Andover Radio broadcast live from the event all day, giving radio listeners to experience the day, while no doubt remaining in the shade at home. Broadcasters Richard Hobbs and Sarah Gisbourne from Love Andover FamilyLife spoke to many of the visitors and exhibitors on the day, relaying the work of organisations who attended and supported the event like SAAFA, 22 Engineer Regiment and the Gurkha Museum.

The event concluded with poems from local writers Dan Hooks and Carole Payne and a stunning musical performance from Alex Krupa. Speaking about Andover, Alex who hosts open mics nights in town and has been nominated for an award for his weekly country music programme on Andover Radio says, “Andover has so much potential. The whole Love Andover hub of activity is exactly what the town needs to bring it together and a-line its needs to re-energise people at events and through social work”.

David Harber from Andover Radio said, “We hope everyone had a great day yesterday and there aren’t too many sunburned shoulders and faces.

“Thank you to everyone who played their part, however small, in making yesterday’s event a success. I love watching the people of Andover have a great day with such a wide range of activities. I think it shows that this little town can think big and achieve.

“And, thank to everyone who came to the event and hopefully learned a little more about the work our Armed Forces do, have done and will do to keep this country safe.”