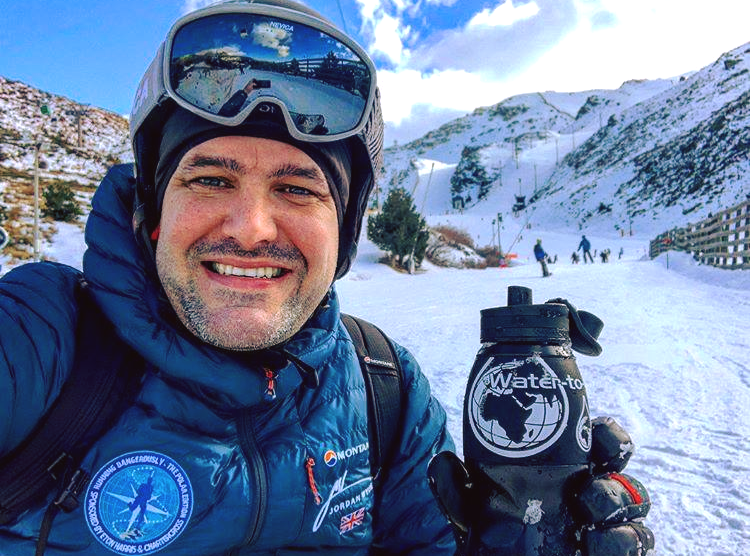 Keeping up with what’s happening in the world is difficult these days. Keeping up with the most adventurous ‘man about town’ is practically impossible.

When he’s not in our TV screens, extreme adventurer Jordan Wylie can be found in our High Street studios spreading the word about his charitable work but, the next minute, he is donating his fundraising skulling boat to charity in Wales.

Then, we discover, thanks to his many social media posts that he’s on top of a snow-covered glacier within the arctic circle.

Either he has invented some futuristic teletransportation technology, has found a way to increase the number of hours in the day or he simply cannot sit still.

Well, we’ve had enough of it.

Multiple charity patron and star of the Channel 4 programme ‘Hunted’, Jordan Wylie has been given no choice, but to commit to keeping everyone in and around Andover up-to-date on his travels through frequent live updates on 95.9 Andover Radio.

‘Around The World with Jordan Wylie’ will be updated and broadcast as and when he finds time to share his experiences. Maybe he will do this while on an aeroplane, maybe while skiing over ice on a snowmobile, or perhaps he will be sharing his stories of suffering and success while huddled inside his thickly-lined Arctic bivouac.

After being recently awarded a Pride of Andover prize, he has agreed to make sure you can keep track of the huge variety of functions, fundraisers and treks of which he is part. Jordan says, “I want to take the people of Andover with me.

The Siberian Ice Race is a half marathon when the Siberian temperatures can get as low as 39 degrees below zero. The race at Omsk was won last year by Mikhail Kulkov who completed the race in 1 hour 13 minutes.

“I will also be giving updates on my first ultramarathon in the Falklands,” says the former British Army soldier, maritime security asset and author of ‘Citadel’, a true story of his war against pirates from Somalia.

The ultramarathon in the British Falkland Islands is where Jordan will be expected to run four times the usual length of a marathon in a single attempt. As well as the distance, one of the biggest challenges he will have to contend with is the weather.

There is very little land mass at that latitude and the weather changes rapidly. It is not unusual to have warm sun, bitterly cold winds, hailstorms, snow blizzards and torrential rain all on the same day. Also, with no trees on the Islands, there is no shelter when the weather turns for the worse.

36 year old Jordan is a patron of a number of charitable organisations, most notably Frontline Children, Epilepsy Action and the Andover-based Jamie G Sporting Trust.

The former soldier who served in Northern Ireland and Iraq found out he has epilepsy after his first seizure two years ago.

To date, Jordan’s adventures have raised over a million pounds for not for profit organisations. And, given his energy and determination, that’s set to grow.

Living by the mantra that ‘every day is a chance to change your life’, Jordan tries to encourage everyone to push the boundaries of their capabilities and to “be fearless in pursuit of dreams”.

In October 2019, he took on the challenge of rowing ‘unarmed and unsupported’ across the Bab-el-Mandeb Strait (Yemen and Djibouti); one of the most dangerous water passages in the world, known as the ‘Gate of Tears’.

It took Jordan only 13 and a bit hours to complete the gruelling challenge. The journey from Djibouti to Yemen was made harder by the scorching 38°C heat.

So, if you think that’s hot… or, perhaps you thought it was cold in Andover when you woke up today, consider this: “Its minus 14 degrees here at the moment,” he told Andover Radio today. Temperatures are likely to get much lower.

As Jordan landed in Siberia, ready to take part in the Siberian Ice Race, he said “This hasn’t started well.”

His airline lost his luggage.

In his first report to Andover Radio he told listeners, “It’s set to be minus 18 degrees later. Without my luggage, I have no running trainers, no running kit and no warm kit”.

Assuming Jordan is able to get some clothing and get a satellite signal, his updates will keep everyone abreast of his tireless work, all of which is to raise awareness or funds for any one of his multiple charitable organisations.

Please support Jordan and his efforts by visiting GivePenny here and listen to 95.9FM Andover Radio for his ‘Around The World’ updates.

But, don’t be surprised to hear him from the Polar extremes at 9.30am, then see him enjoying some warmly appreciated family time back in Andover by teatime.

Jordan. We salute you.

Do you recognise this man after a robbery in Andover?
CCTV footage released after Tesco burglary