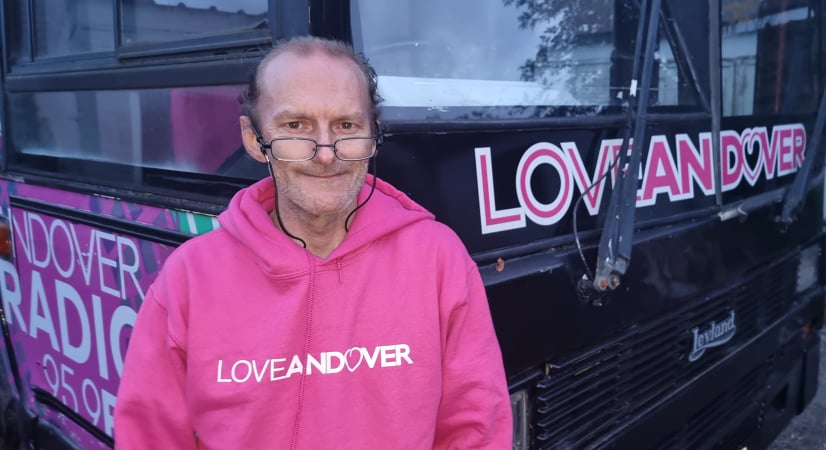 Andover Radio’s Kevin Ridgeon has been shortlisted as ‘Volunteer Of The Year’ in the prestigious Community Radio Awards.

The award is made to a volunteer at a UK radio station who ‘really goes above and beyond the call of duty’.

With over 15,000 volunteers across the UK’s 300+ community radio stations, the shortlisting for this award has been warmly welcomed by the high street-based station which also runs the Love Andover Observer newspaper.

48-year old Kevin has been working at Andover Radio for two years and whereas he be found at practically every outdoor event the station attends, his work is mostly ‘behind the scenes’.

Managing Director David Harber says, “Kevin – we call him ‘Captain K-Man’ – makes himself available to anyone, anytime for the benefit of the radio station and the community it serves.

“No-one in our organisation has ever met anyone so willing or able.

“His business card says, ‘Wizzard’. He is our IT expert, our HR manager, First Aid officer, our office manager, he’s our Outside Broadcast expert and – er – transport manager.”

Kevin has also taken on the role of managing the Love Andover ‘Love Bus’, a single decker community bus which can be seen at events across North West Hampshire, helping to facilitate non-profit and community events as well as supporting many other local charities.

Awards organiser Martin Steers says, “The breadth and depth of entries never ceases to amaze, and yet again our judging panel from across the industry has had some tough choices to make.

“After a difficult year, our sector has been ever more important in its communities, and giving teams a well deserved opportunity to celebrate is key.”

“In a sector where the majority involved are volunteers, this award (Volunteer of the Year) is for those that are an example and inspiration to all.”

The awards ceremony will be held in Coventry in October, representing over 300 stations in the United Kingdom. They follow last year’s virtual event where Andover Radio won three awards including a bronze for the Love Bus community project.

The awards nomination for Welshman Kevin concludes, “It’s hard to fully assess the impact that Kevin has on the radio station – because he is ubiquitous, obliging and simply part of the living organism we run.

“Every radio station needs a Kevin.”