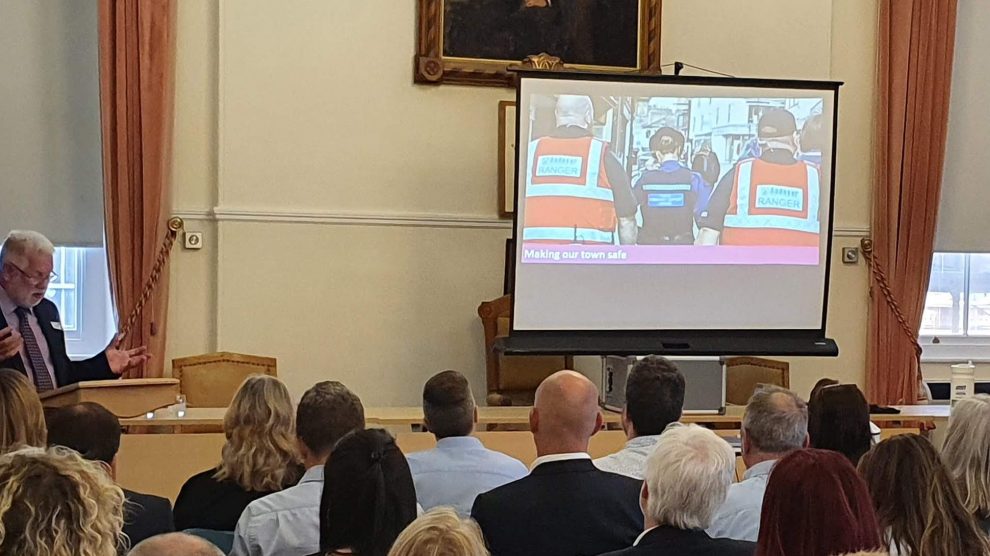 The upper Guildhall was the packed venue this week for town centre businesses to attend the Andover BID’s first showcase event marking the halfway mark of BID’s first 5-year term and to hear of what BID has achieved and will be delivering.

Steve Godwin, BID Manager supported by Ange Moon, chair of BID and the BID board of directors spoke of how businesses had asked, and they have delivered. Steve spoke of how BID has been pro-active and made a positive input into the town with the aim to work collaboratively with stakeholders in reducing duplicity.

He said that interestingly, fifteen months has been during COVID times so for businesses and for us all it has been an extremely difficult trading environment. Just some of the achievements that BID has made during its first 2 and a half years in meeting its objectives is to help make our town safer, market the town positively through initiatives aimed at making it more attractive and appealing, and supporting businesses throughout the pandemic.

Steve spoke of just some of BID’s early achievements which have included the introduction of the town centre ranger service where the rangers attend an average of nearly 400 incidents and visits each month, the introduction of  a state of the art two-way radio communication system, free public Wi-fi, a premises match funding grant scheme to encourage business to enhance and make their premises more attractive, and a new InAndover marketing town website and digital arm to the high street.

BID has also employed the services of Shelly Coburn, an experienced event coordinator who as well as delivering events for BID is also working across the town in ensuring that all events are properly coordinated and communicated. BID has also been able to establish an opportunity for eight new or fledgling businesses to share an empty retail premises so that they can experience a retail experience whilst adding to the offer of the town. It is hope that some of these businesses will develop and grow to the point where they can establish their own premises in the town. Such was the case with Kate Griffin of Wessex Spirits who bought the Lamb Inn who is partnering up with Tim Abram of Andover Tap to bring back a community pub with lot’s on offer. They both have a space in the InAndover shared shop.

Steve made the point that the world is changing, our high street is evolving and embracing those changes. Andover is well placed to provide a changing environment and be in the position to enhance the consumer experience. Life in the high street is already becoming experiential rather than shopping. People no longer want crowded retail environments, they want space, convenience and quality linked with good access and low-cost car parking. The only certainty likely is that we won’t see a return to how life used to be, the giants and retail multiples have largely gone from all towns and even our neighbouring Newbury has lost its Debenhams and John Lewis stores. The future of the sector relies on fewer shops just selling goods and more on retailers with a strong in-store customer experience focus, as well as spaces that act as community hubs. Andover BID are working collaboratively with TVBC our local authority in helping with the place shaping of Andover to ensure that we continue to remain viable and embrace the flexibility required to adopt change.

The future of the high street will be exciting, with more space dedicated to socialising and community, and more opportunity given to local entrepreneurs. But the high street’s transformation won’t happen overnight, nor without the backing of private investors and local government.

During October, the BID board of directors have agreed that now is a good time to speak with all our businesses to evaluate the work of BID and to listen to look at what they would like to see from now on.

The Showcase evening was attended and supported by Cllr North and the chief executive and senior officers from Test Valley Borough and almost 70 local businesses to celebrate the work of BID and to speak of BID plans going forward. Cllr North and his officers spoke of Test Valley Borough Council’s aspirations for the town and with support from BID and business stakeholders, it is proposed to supercharge the effort in the town centre with the Master Planning and plans going forward for the town.

A surprise presentation was made at the end of the evening by Cllr North to BID Ranger Aarron Bateson who was thanked and presented with a certificate of outstanding services to the town centre community for his recent action in carrying our emergency CPR resulting in a young person’s life being saved. Aaron also received a retail voucher to be used in the town centre. Further details www.inandover.co.uk 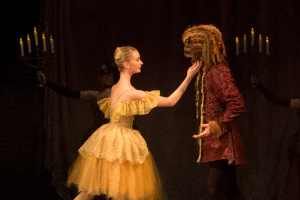 The Lights brings Beauty and the Beast ballet to Andover this festive season, Sunday 11 December 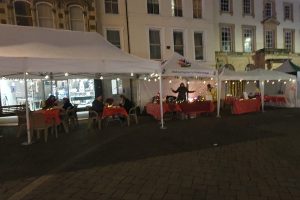 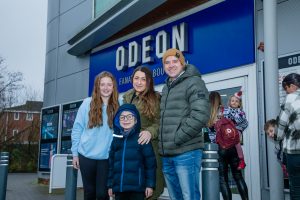