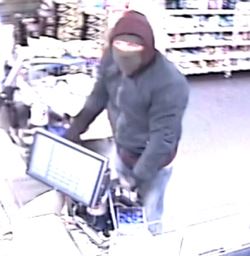 Police in Andover are appealing for information following a report of a robbery at a Tesco Express store in Andover.

A man entered the store and demanded the shop worker give him money from the till.

When he was told there was no money, he attempted to hit the till before running away when more staff arrived.

No money was taken and no injuries were reported.

Police says “We have released a CCTV image of a man we would like to speak to as part of our enquiries.

“Were you in this area at the time? Did you see anything suspicious? Perhaps you remember seeing a man nearby in similar clothes? Did you see where he went after leaving the shop?

Anyone with information should call police on 101, quoting the crime reference number 44200002207.

AROUND THE WORLD: Jordan Wylie
We feel your loss.