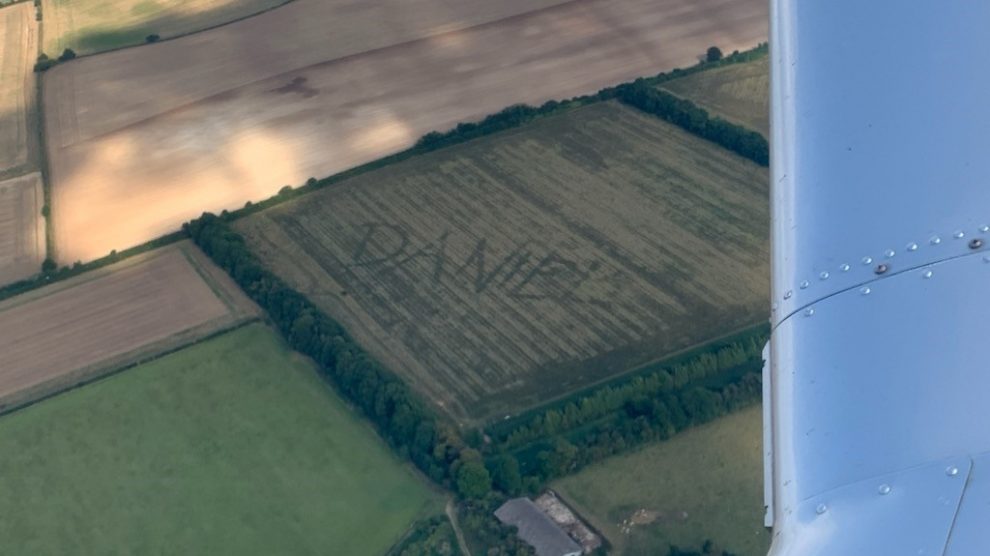 Whereas it’s unlikely to make the next album cover for Led Zeppelin, the name ‘DANIEL’ has appeared in a field near Andover.

95.9FM Andover Radio’s Morning Crew and Radio Quiz host Grant Francis was flying back into Thruxton today and spotted the etched name in a field near Chilbolton.

“I decided to go for a fly earlier on, just pottering around in the sky and looked down on the approach back into Thruxton just south of Chilbolton.

“There was a field with ‘Daniel’ written across it. I thought it was a bit… different”.

The etching into the field came as a surprise to the radio host. “I just wonder who Daniel is”, says Grant. “I’ll share some photos and mention it on the programme tomorrow.

“It’s just there. I wonder who he is, why he did it, or if anyone knows who Daniel is? It can only be seen from the air.”

Whereas this is hardly classed as one of the most inexplicable artworks, crop circles are a worldwide phenomenon with Hampshire and Wiltshire being the location for more than 70% of all crop circles since the md-1980s.

Crop Circles are not a modern phenomena, ‘The Mowing Devil’ (below) was the title of an image in the ‘Strange News out of Hartfordshire’ (Hertfordshire) pamphlet published in 1678.

It told the story of a farmer who claimed, his field ‘appeared to be in flame’. The next morning, the field was found to be perfectly mowed, “that no mortal man was able to do the like”.