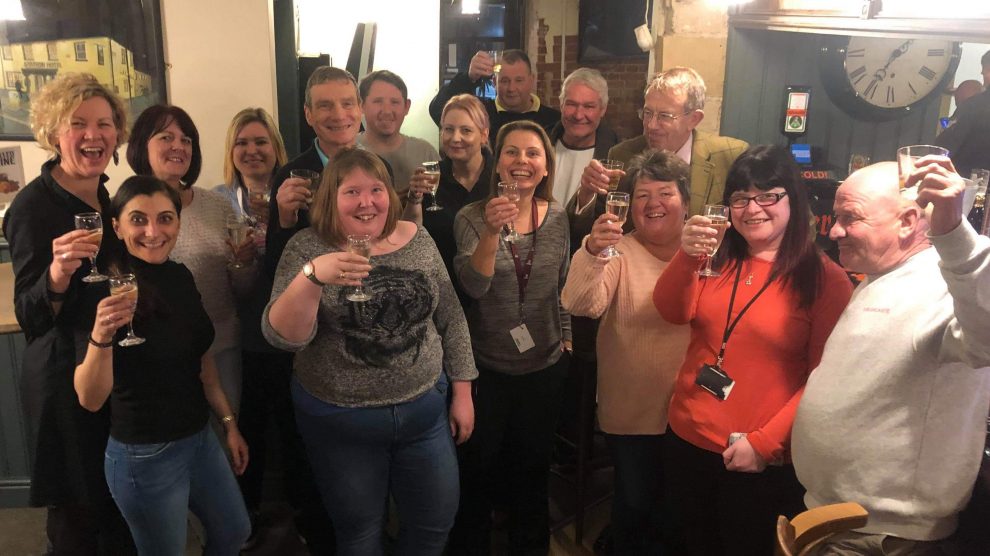 A landlord and landlady are celebrating as the town’s longest running pub tenure.

Alex and Romana Gillies took control of The Station on Bridge Street 14 years ago today.

The couple acquired the 18th century property in 2005, just after a ‘credit crunch’ then a recession.

Having invested tens of thousands of pounds of their own money into the Enterprise Inns venue, they have weathered the storm of running a pub in ways that many others could not tolerate.

The Bishop Blaize, the Merry Monk and the King’s Arms have been turned into flats or other businesses in the last decade or so.

Recently, other Andover town centre pubs like The Globe change hands every six months as tenants come and go.

“It was fourteen years ago I made the mistake of taking on a pub”, laughed army veteran Alex.

“It’s been the best of times and the worst of times. But I love what we do, the people and the town”, he added.

The 4-star Station Inn has beautifully arranged hotel rooms above the venue. The property is owned by Enterprise Inns.

A tenancy is agreed which usually means pubs pay a suffocatingly higher price than is otherwise freely available.

Regular costumer Becky Shearer says, “Bob and I have been drinking here for 26 years.

“This is an absolute jewel in Andover. The work Alex and Romana have done to support the town, their costumers and local charitable organisations keeps us here.

“The way they have created a sense of community and camaraderie keeps us coming back. We absolutely love it here.”

Alex and Romana frequently host charity events, from last week’s Biggest Pub Quiz to the start and finish of the Ride for Stokie charity cycle event.

“We really admire Alex and Romana for their commitment to the town and their quality of service to customers.”

The Station Hotel was renamed The Station Inn in 2015, having been originally called The Eight Bells when it was built in 1769. It’s believed it was named ‘The Station’ in 1864.

The pub may have enjoyed the spoils of the Andover-Redbridge canal which opened in 1790 as it was in a great position as it was on the main new turnpike road from London to the Westcountry.

It was the arrival of the railways in Andover in 1859 which gave the pub the name it uses today.

When the Andover to Southampton (Sprat and Winkle) line was closed as part of the Beeching Plan in 1963 some consideration was made to changing the name of the pub, but, like the old Railway Tavern on Weyhill Road (now The Malthouse), the change of name was not pursued. The Junction pub also existed closer to today’s existing train line.

Costumers celebrated the couple’s success today with pizza and drinks.

“We think we only employ the best staff” says ex-serviceman Alex. “It’s the staff behind the bar that interact with costumers that gives then the happy experience that’ll keep costumers keep wanting to come back.” Alex served with the Royal Electrical and Mechanical Engineers (REME).

The venue is well-known for live music with a Blues Jam night every third Monday of the month, which is regularly attended by TV archaeologist Phil Harding.

The pub also has live music every Saturday and also hosts events in its garden which raised money for charities, particularly Cancer charities.

Becky Shearer concludes, “This pub is the real spirit of Andover.”