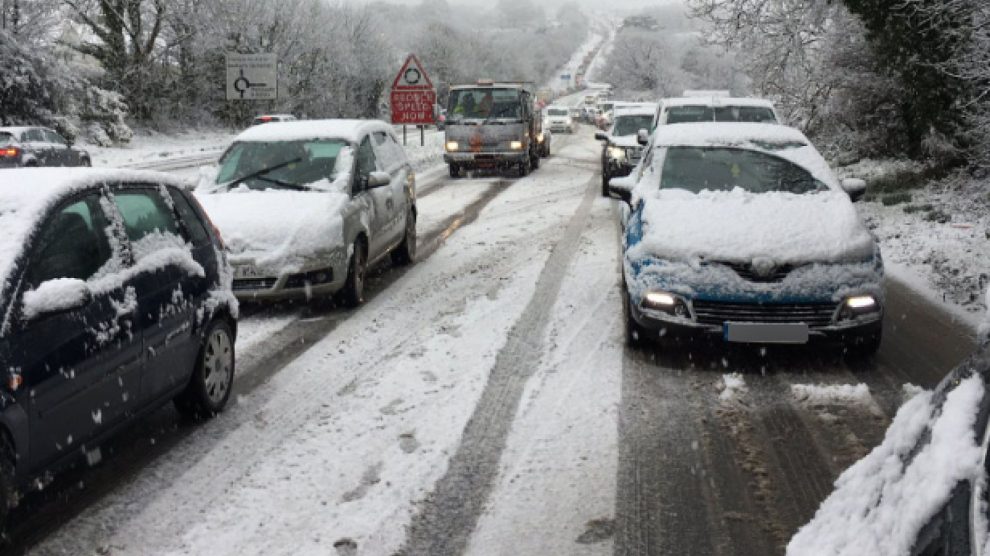 The Met Office has issued an amber severe weather warning for heavy snow as all regions recorded their lowest temperatures of the winter so far.

The amber warning for southwest England and southern Wales is in force from 2pm until 9pm on Thursday.

However, the snow is gradually making its way eastward towards Andover.

It means the possibility of a risk to life and property, travel delays, road and rail closures and interruption to power supplies.

The Met Office says that some rural communities could be cut off, “Three to seven centimetres is likely to accumulate quickly – within two to three hours – with up to 10cm (3.9in) in some places.

“The highest snowfall accumulations are likely to be in areas above 150 metres or so.”

Sky News weather presenter Nazaneen Ghaffar said the evening snow would “be an added hazard for central and southern parts of the UK and Ireland. Winds will also be strong across the South West”.

The wintry conditions are expected to last well into Friday with warnings of ice and snow likely to bring travel disruption over parts of north and east Scotland and England.

Councils have stocked up with more than 1.4 million tonnes of salt, the Local Government Association said.

Network Rail Western advised customers to travel before 9pm on Thursday and to check services with their train provider.

Angela Saunders and Sarah Sharp, ‘The Weather Girls’ at local radio station 95.9FM Andover Radio said, “The temperatures in the UK just pale in comparison to the Antarctic-like temperatures in parts of America.

“We have a team of reporters from around Andover who will give updates on what’s happening from Ludgershall to Wherwell.  We will also have all the information you need about roads and possible school closures”.