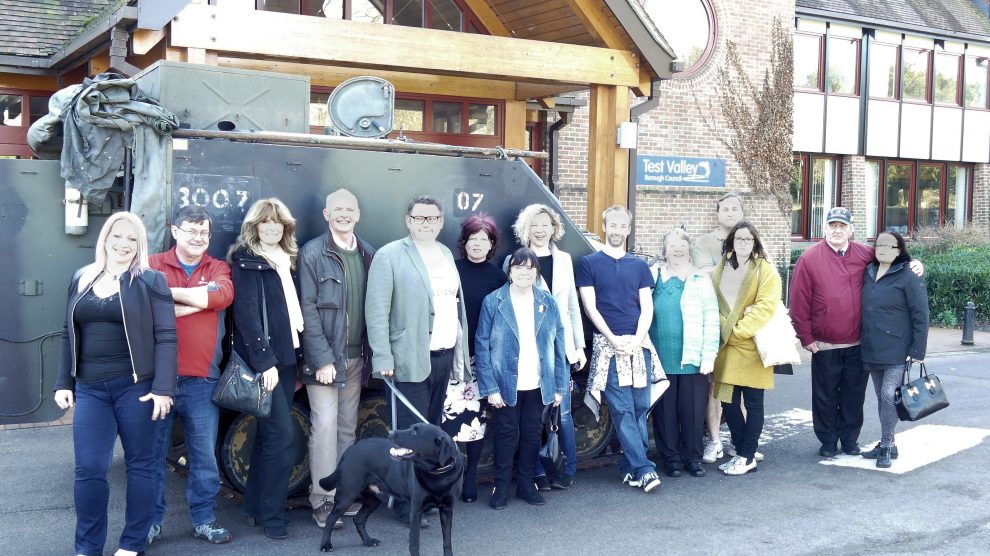 A new political party have started their election campaign with a shot across the bows of Test Valley Borough Council.

The Andover Alliance, a group of local independent candidates, began their campaign with a protest over the poor treatment of our Armed Forces veterans.

On Sunday morning members of the party gathered outside the borough council offices at Beech Hurst, arriving in an armoured vehicle.

Army veteran and Andover Alliance spokesperson David Coole said, “Given our local military history, TVBC should be the best Council in the UK for supporting our veterans, not the worst.”

Despite Andover being the home of British Army HQ, nearby Middle Wallop being home to Army Aviation and many other military facilities, TVBC was recently singled out as “the worst council in the UK for helping veterans” by David Wood, the Legislation Officer for national charity Help 4 Homeless Veterans.

Mr Coole says, “The Andover Alliance is committed to supporting those who served in times of war, military conflict and peace and will provide the leadership for veterans affairs where all levels of local and national government have failed those who have served our country.”

Their party Manifesto claims to be the only one of any local party which focuses on local issues. It says if they are elected in May they will introduce a Veterans Officer as a paid role within the council who will be an advocate for any ex-service personnel.   The Officer will ensure veterans receive housing priority and they will support both community and work-based programmes to improve employment opportunities.

Host of the Channel 4 reality show Hunted and Army veteran Jordan Wylie saw several friends killed while serving with the King’s Royal Hussars. He was later diagnosed with post-traumatic stress disorder (PTSD).  The TV star said, “For me, we are failing our own people. We are failing the British troops that have served this great nation. It is an absolute tragedy that veteran suicides are happening.”

Campaign supporter Irene Williams added, “As the Stepmother of a veteran of at least eight tours of duty who’s suffering with PTSD and still battling with the Government, I fully support this campaign.”

The Andover Alliance says the town has a large number of veterans who often have issues being housed after they leave the forces, especially those suffering from physical and mental health issues, who are unable to work.

Veterans’ homelessness is a problem across the UK, with some sources claiming as many as 13,000 ex-service personnel are living rough.

However, the party says more than just housing is needed, they state timely and specialist mental health is desperately required.  In 2018, 78 serving military personnel and veterans took their own lives following mental health struggles, exceeding the number of battlefield fatalities in 11 of the 13 years that British troops were in Afghanistan.