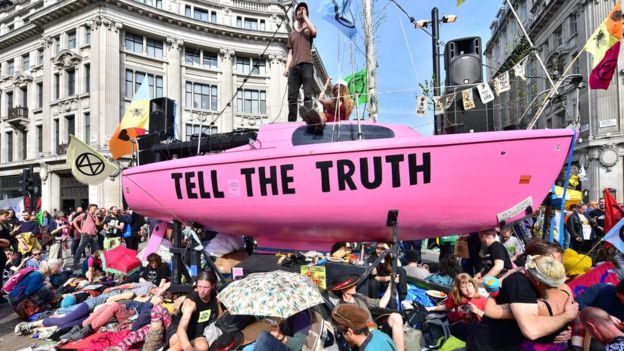 Extinction Rebellion (XR) have announced the launch of the ecology campaign group in Andover.

Extinction Rebellion Andover (XR Andover) claim they have organised a unique showing of the film ‘Heading for extinction and what to do about it’.

It is understood that the film will be shown at special event at The Queen Charlotte pub next Thursday (12th September). Local radio station 95.9FM Andover Radio will be talking to exclusively to protest organisers in the next few days to learn more about their plans.

Organisers says they will also post “useful and interesting actions and articles” on their XR Andover Facebook page. The aim is to bring Andover into the fold of a growing group of people who are concerned about the welfare of our planet.

So, who are XR? And what do they want?

XR are an environmental campaign group who have been staging protests intended to cause “major disruption” across the UK.

Describing itself as a “non-violent civil disobedience activist movement” it wants the government to declare a “climate and ecological emergency” and take immediate action to address climate change.

Organisers say, “The planet is in ecological crisis: we are in the midst of the sixth mass extinction event this planet has experienced. Scientists believe we may have entered a period of abrupt climate breakdown.”

They say that this is an unprecedented global emergency. “Our children and our nation face grave risk.”

“In this public talk, members of XR will share the latest climate science on where our planet is heading, discuss some of the current psychology around climate change, and offer solutions through the study of social movements. Everyone is welcome and there will be plenty of time to ask questions and discuss afterwards.”

Entry is free but they ask for donations towards venue hire costs and travel expenses for speakers.

The biggest UK protest was in April when activists brought some of London’s busiest roads to a standstill over an eleven day period. Over 1,000 people were arrested, most on suspicion of not following police instructions to move.

A recent BBC poll found that almost half of all 18- to 24-year-olds, (47%) either “strongly supported” or “somewhat supported” the disruption of traffic and public transport to highlight Extinction Rebellion’s aims.

The band Radiohead have recently said that proceeds from some of their music tracks will go to help fund Extinction Rebellion.

XR claims to be planning an ‘Autumn Uprising’, starting on October 7th 2019.

Whereas bringing Andover to a standstill may be more troublesome to orchestrate – and garner less impact – than such an event in London, the teams behind XR locally and globally are committed to their cause and we will no doubt be hearing much more from these environmental activists in the coming weeks and months.