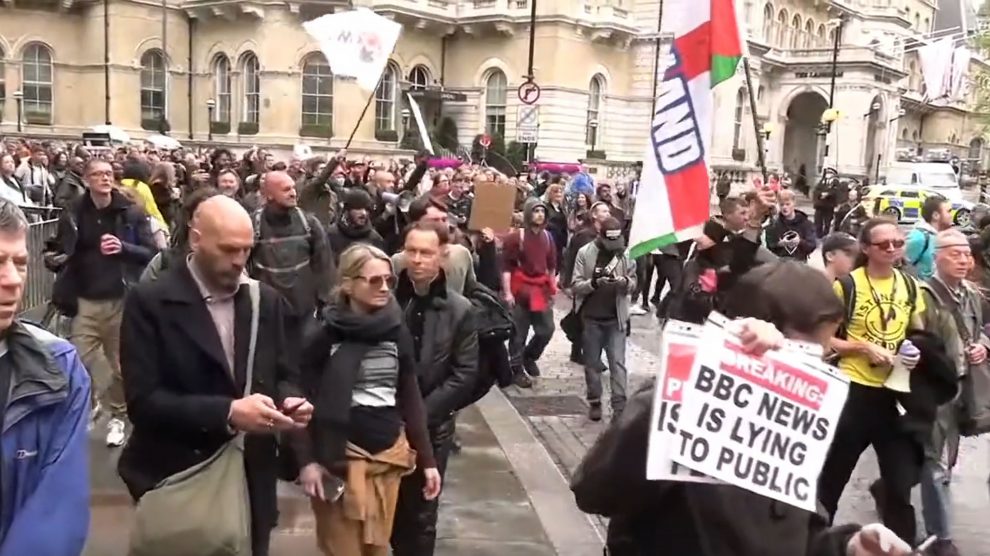 In my university days, I spent some time with PR guru Max Clifford who said, “I get paid more money to keep stories out of the press than get them in”.  Those words have always fascinated me. On a daily basis, I wonder more about what we are not being told than the stories we are actually being told.

In fact, I had to search really hard to find any information about these protests where people chanting ‘Shame on you’.

The masses (up to 100,000 in London, according to some reports) were sharing their displeasure that the public service broadcaster have a news agenda that keeps the public in a permanent state of fear. Search engines and social media companies had already taken steps to ‘devalue’ or ‘delist’ stories on the protests, making them harder to find.

Also last week, the Government published its Online Safety Bill, legislation designed to make the UK ‘the safest place in the world to go online”.  Missing from this description is that the Bill would make the UK a world-leader in censorship and state control.

The legislation will force large media companies to remove any content which risks having a significant adverse psychological impact on an adult.  This is so vague, in effect it means, Facebook will devalue or remove any article, story or post you or we share which goes against the government’s wishes.  And it will give them powers to snoop on digital users. All state-backed.

Civil liberties campaign group Big Brother Watch say, “The (Covid) pandemic was a security crisis and many governments… have begun to develop a growing paranoia about the spread of information they cannot control. Journalists once acted as the gatekeepers of expression and the internet has democratised speech and has meant that everyone now has access to a platform.”

Many in government do not like this direction of travel.

If you blinked on Saturday, you may be forgiven for missing the footage of the Israeli forces’ air attack in Gaza which dramatically collapsed the high-rise building that houses Arabic broadcaster Al Jazeera. Should Hamas have performed the same exercise on Israel, I am sure it wouldn’t have been possible for you to miss the story.

Access to information so you can make your own – informed – decisions is absolutely crucial in a free society.  As your own personal level of happiness is based on the information you receive about the world around you, it should not be dictated by the news media, or the government which controls it. “Ignorance is strength” wrote George Orwell.

Should local newspapers dedicate a gushing 8-page special to the local conservative party’s success in the recent elections, it might make you question whether the narrative you got from that publication ahead of polling day was genuinely free of external interference.

And it’s not just the editorial words you read.  UK government has just agreed a £320m contract for Covid-related advertising, the same time that the Prime Minister was told to ‘Stop terrifying Brits with totalitarian warnings’, warning like the ad campaign telling youngsters if ‘they don’t get the jab’ they could ‘kill Granny’.

This chimes with the work of Spi-B, a group of Sage-linked behavioural scientists who advised the government, “The perceived level of threat needs to be increased amongst those who are complacent”.

As our hopes for a full lift of lockdown restrictions next month diminishes, no doubt we are about to be bombarded with yet more news content, messages and adverts that will moderate our levels of happiness and freedom.  And we will get dwindling access to genuine information sources that are free from some form of outside interference.

In the time it took to write this article a Daily Express headline changed, removing a reference to Princess Michael of Kent’s Astra Zeneca injection and subsequent blood clots. The headline now reads just “worrying time for family”.

I fervently believe in the right not to live in enforced fear, our right to protest and a media that is free to report on those protests; helping to ensure society does not blindly adhere to the realisation of those Orwellian forewarnings.

This is an opinion piece by David Harber. It does not necessarily reflect the views or opinions of Andover Radio, Love Andover or its employees.