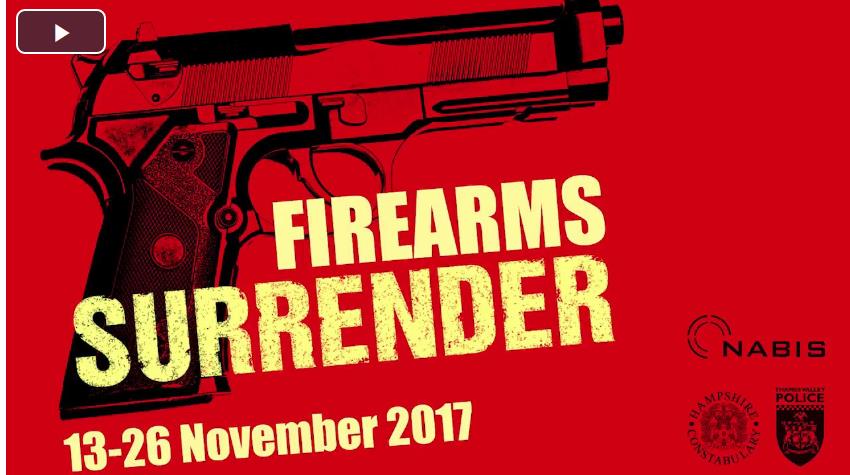 “Just one gun off our streets could save a life” is the message from Hampshire Constabulary as they launched “Firearms and Ammunition Surrender” this week.

Hampshire Constabulary are joining police forces across the country to take part in the national campaign that aims to reduce the number of illegally held firearms within our communities.

“Each firearm handed into us is one less that could fall into the hands of criminals. The surrender is giving people the chance to hand in any firearms or ammunition which have come into their possession for whatever reason.”

Whether it is an old family heirloom that has been stored away for years, a former military weapon or an unwanted firearm which was previously legally owned – all can be handed in to your local police station, safe in the knowledge that they will be disposed of safely.

During the fortnight firearms licence holders are also being encouraged to consider the surrender of weapons they no longer have any use for.

The surrender, which started on Monday 13th November and runs until 26th November, is part of a national initiative run by the National Ballistics Intelligence Service (NABIS).

Chief Inspector Emma Baillie, Head of Armed Response for the Joint Operations Unit for Hampshire and Thames Valley, said “This is your chance to safely dispose of any guns or ammunition you no longer want but don’t know what to do with.”

“Surrender them now and we can dispose of them safely, making sure that they do not fall into the hands of criminals.”

“We know that the consequences of firearms or replica firearms falling into the wrong hands can be fatal and can cause real fear within our communities.”

“They also have the potential of being used against our own officers who could find themselves confronted with someone wielding a weapon in public.”

She added “While crimes involving firearms in Hampshire are rare, we know that every firearm poses a potential threat if they are not licensed and stored safely.”

“That is why we are offering this opportunity to safely hand in your unwanted firearms.”

“The fight against gun crime is stronger than ever. We take all reports of incidents involving firearms extremely seriously and robust action will be taken against anyone who commits a firearms-related offence.”

During the two-week campaign, those surrendering firearms will not face prosecution for the illegal possession upon surrender and can remain anonymous.

Police have said that this is not an amnesty and if further examination of a surrendered firearm reveals a link to a crime, this will be investigated.

Police are asking anyone who is unsure about an item they have to call us on 101 to get advice on what they should do. Alternatively, you can call Crimestoppers anonymously on 0800 555 111.

Historic ordnance should not be moved or handed in to any stations, if you think you have any items like this, please call Hampshire Police on 101 for advice.

Please see below for a list of which stations will be taking part in the surrender:

Aldershot Police Station
Wellington Avenue, GU11 1NZ.
Opening times: Monday to Saturday 8am to 8pm. Sunday 9am to 5pm. Closed between 2pm and 2.45pm on Sunday.

Eastleigh Police Station
Leigh Road, SO53 9DG
Opening times: Monday to Saturday 8am to 8pm. Sunday 9am to 5pm. Closed between 2pm and 2.45pm on Sunday.

Fareham Police Station
Quay Street, PO16 0NA
Opening times: Monday to Saturday 8am to 8pm. Sunday 9am to 5pm. Closed between 2pm and 2.45pm on Sunday.

Lymington Police Station
Southampton Road, SO41 9GH
Opening times: Monday to Saturday 9am to 6pm. Sunday 9.30am to 6pm. Closed between 2pm and 3pm every day.

Newport Police Station
High Street, PO30 1SZ
Opening times: Monday to Saturday 9am to 6pm. Sunday 9.30am to 6pm. Closed between 1pm and 2pm every day.

Portswood Police Station
St Denys Road, SO17 2GN
Opening times: Tuesday to Friday 9am to 6pm. Saturday 9am to 5pm. Closed 2pm to 3pm each day.

Southampton Central Police Station
Southern Road, SO15 1AN
Opening times: Every day 8am to 8pm.

Waterlooville Police Station
Swiss Road, PO7 7FX
Opening times: Friday to Saturday 8am to 8pm. Sunday 9am to 2pm, then 2.45pm to 5pm.

Winchester – Mottisfont Court
Tower Street, SO23 8ZD
Opening times: Monday to Saturday 8am to 8pm. Sunday 9am to 2pm, then 2.45pm to 5pm.