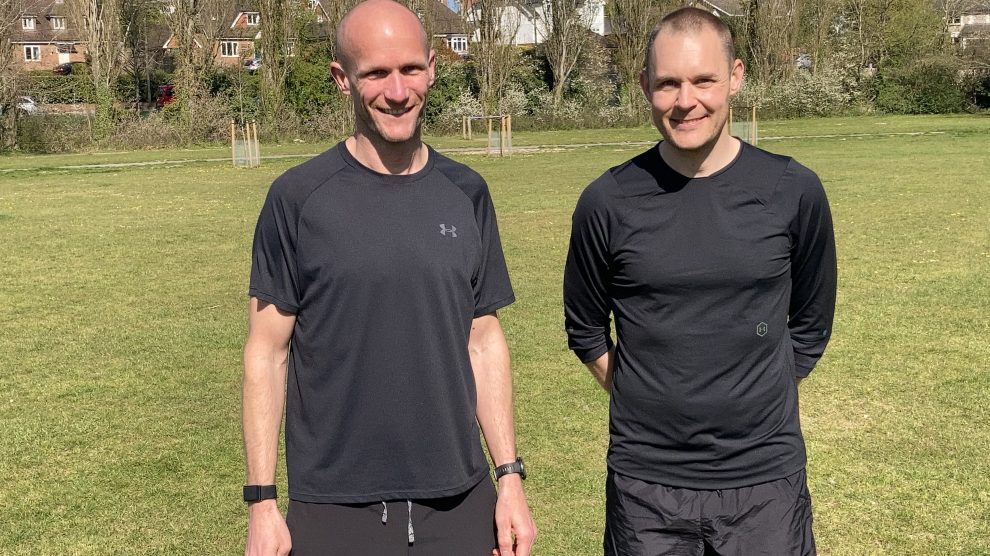 Two friends and co-workers from local housing association Aster Group have set out to run 48 miles in just 48-hours to raise money for charity, Dementia UK this weekend in Andover.

Dave Pidgen, data manager and Carl Millward, assistant electrical manager will run four miles every four hours to clock up 48 miles in just two days. The gruelling running challenge will see the pair run at all times of the day including two midnight and 4am dashes.

The pair both work for the local housing association and have so far raised £1,700 for Aster’s charity of the year, Dementia UK.

Dave was inspired to raise money for Dementia UK after helping a lady with dementia who had become lost in Andover while he was out on a run.

He said: “I was asked for directions by a lady who was lost in Harewood Forest, I pointed her in the right direction, and I went on my way.

“A little way up the track I didn’t really feel comfortable letting her go on her own, so I went back to check on her. She explained she had dementia and had been wondering around lost for three hours.

“I walked with her for three miles to make sure she got home safely, chatting along the way and it was really terrible seeing someone who was physically fit struggling to remember things.

“Now that I’ve seen the effects dementia can have on a person, I wanted to raise money for Dementia UK and support the great work they’re doing. I am expecting this challenge to be up there with the toughest things I’ve ever done, especially factoring in the 48 miles of running mixed with sleep deprivation.”

Carl hopes to end the challenge with a final victory lap with friends and family on Sunday afternoon in Charlton Playing park.

Carl said: “I’ve been blown away by the support, even though my wife thinks I’m nuts! Dave and I are both always talking about challenging ourselves physically so we both decided that we should give this a go.”

Dave and Carl have benefitted from Aster’s match funding scheme, which will boost their overall total by £1,000 to smash their £2,000 target. Now at time of writing they have raised over £3000. You can donate by going to their JustGiving page.

Here are their movements:

Run 3:
4am Saturday – Dave to leave Old Winton road and Carl to leave Weyhill Gardens and meet at Charlton lakes

Run 4:
8am Saturday – Run from the top of Old Winton road

Week of action to tackle knife crime
Could Andover pub ‘The Lamb’ return?