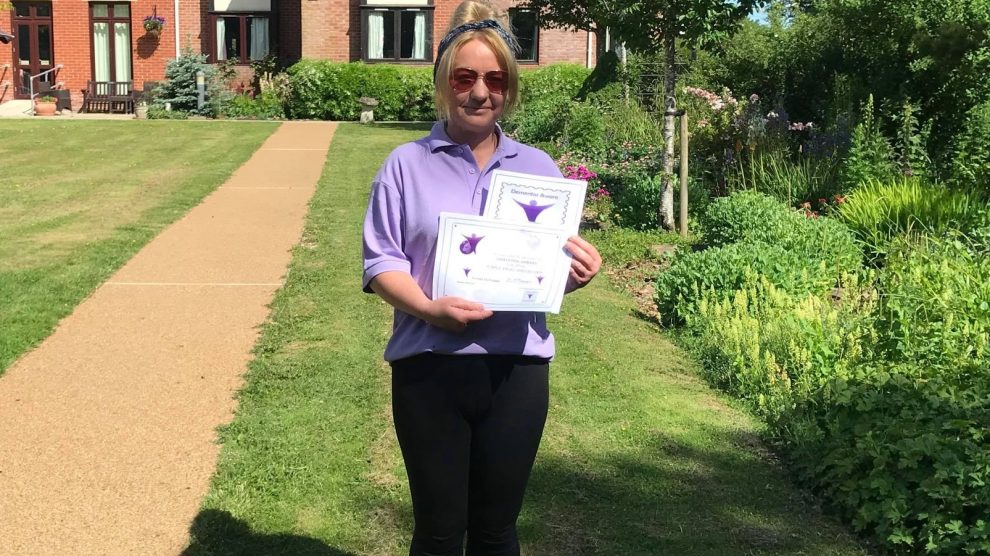 Residents at an Andover nursing home have been supporting ‘World Rocks Against Dementia’ this month to celebrate the benefits of music in tackling the distressing condition.

Hailing it a great success, Millway House in Weyhill marked the dementia awareness day on Wednesday 23rd June with an in-house cream tea picnic for all its residents.

‘World Rocks Against Dementia’ or WRAD is part of the Purple Angel campaign, founded in 2012 by Norman McNamara to change the way people see the debilitating illness. The dementia awareness day began in the US and signifies the benefit that music can bring to sufferers of the disease.

Sammie Ambery, Wellbeing and Activities Coordinator at Millway House is an advocate of the advantages that music can bring to her residents.

She said: “Music is neurologically special in the way that it stimulates many parts of the brain at once, and previous evidence has shown that people living with dementia benefit from listening to music considerably. It assists to reduce anxiety and depression, supports cognition, speech, and memory.

“With several of our residents living with dementia, we didn’t think twice about getting involved in a campaign that is raising awareness and highlighting the benefits that music can bring.”

WRAD has been taking place across the globe over the last four years, and there have been many musical events set up in its honour.

Like many organisations across the world, it has had to adapt its way of working during the pandemic. With gatherings not always able to take place, the organisers have been offering free MP3 players to help dementia sufferers get through a difficult time.

“After contacting Norman McNamara for further details, he very kindly provided me with five MP3 players and our residents were able to choose personalised playlists,” added Sammie.

“It has been so lovely to see them all smiling along to their chosen songs, some of which are bringing to mind times of great happiness in their lives.”

Norman McNamara was diagnosed with dementia at only 50 years of age and started the Purple Angel campaign after he was rudely spoken to by a shopkeeper. Nearly 10 years on, there are now over 1000 ambassadors across the globe, all with their own teams of volunteers.

It is estimated that there are over 44 million people living with dementia around the world, and fortunately, there are now many more dementia-friendly nursing homes, like Millway House, available.

Millway House is part of Sears Heathcare and CEO Richard Adams said: “At Millway House, we are a nurse-led care home, so our approach focuses on meeting the healthcare needs of our residents. Our team are proficient in caring for – and enhancing the quality of life of people with dementia. The benefit of music for sufferers has been widely evidenced and I’m delighted that Millway could join in with this important event.”

Millway House in Andover works closely with families to support residents with mild to moderate conditions, whether they have been diagnosed with Alzheimer’s Disease or one of the other types of dementia which exist.