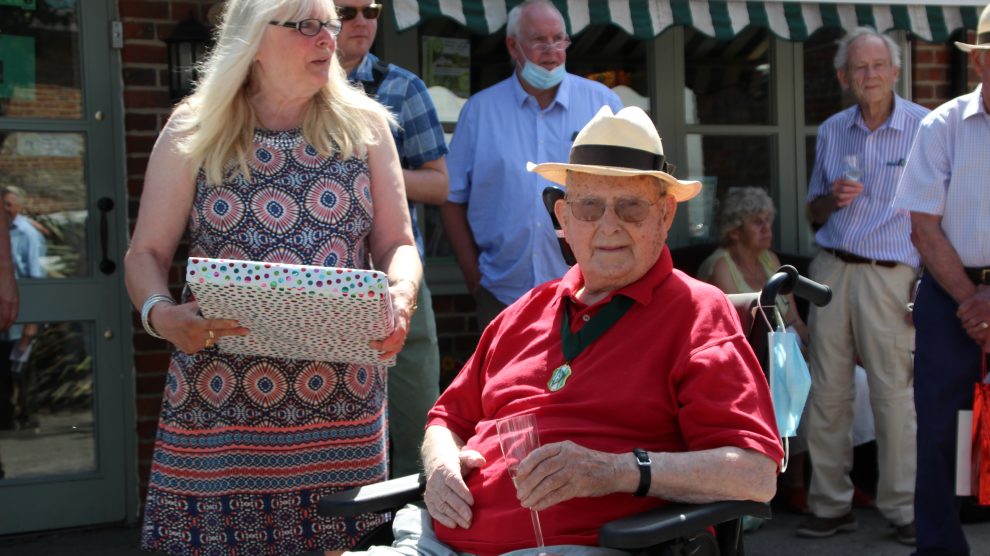 Abbotts Ann came out to celebrate centurion George King for his 100th birthday on the 17th of July.

On a hot sunny day in Abbotts Ann it was a special occasion to honour local resident George King, George who was born on the 18th July 1921 was given a special celebration outside the local village shop in Abbotts Ann. Abbotts Ann bellringers played as the crowd sang Happy Birthday for George.

George who was a former Test Valley mayor was welcomed by current Test Valley mayor, Councillor Mark Cooper. Cllr Cooper said “I am stunned by the size of the turnout, and I remember George being a fine mayor in 1993. George has had a wonderful life and I wish him a very happy birthday”

George who has lived in Abbotts Ann since 1933 when he was 12, with his eight siblings. His father and eldest brother launched Thomas King and sons limited which started small but became a big company that had an impact on the structural rise of Andover. Georges son Michael King told us “They worked on a number of sites, as well as building many houses here in the village, they built Andover fire station, Stannah lifts and the Army flying museum”.

Michael then gave a speech to the crowd “Thank you all for coming. My father has done a lot to help create Andover. He is delighted by you all coming. I am lucky enough to inherit his charm, good looks and of course, modesty”.

Cllr Maureen Flood who helped organise this celebration presented George with a present from the village which was a Daily Telegraph book that contained front pages of the newspaper on each of his birthdays.

Local villagers were out to celebrate and one local resident told us “He built my house just up there; he is a wonderful man and has contributed so much to the village”.

It was a glorious day and an honour to celebrate this wonderful man’s birthday and all that he has done to shape Andover. Happy Birthday!