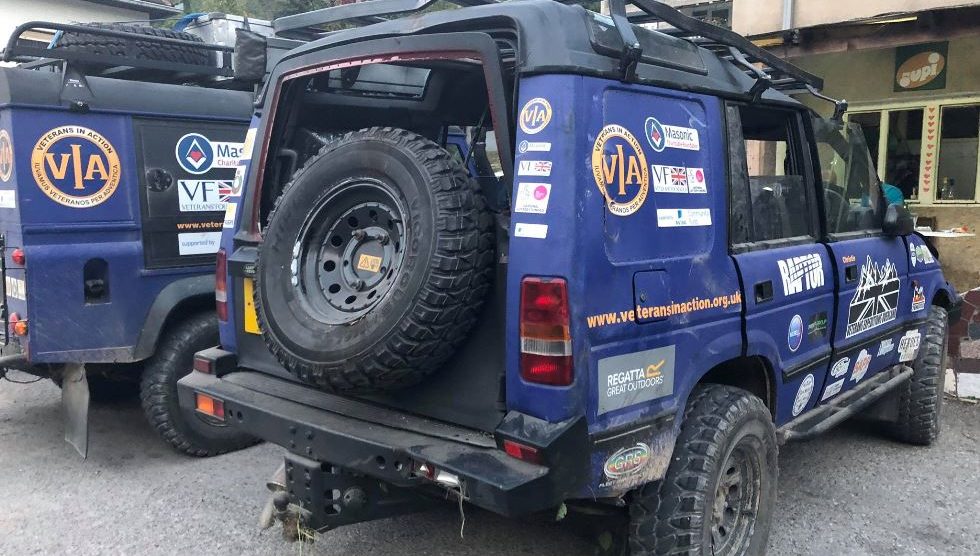 An Andover based charity was out and about in the local area this weekend helping veterans who had served their country.

Veterans In Action (VIA) help military veterans and their families who have suffered the effects of war or who have found the transition to civilian life difficult.

VIA take a non-therapy approach and instead use the outdoors, adventurous activities and expeditions to help rebuild veteran’s confidence, self-esteem and self-belief.

The VIA Team is made up of former service personnel and are based just outside Andover at Redenham Park Estate.

The VIA Team attended the local veterans breakfast club at the Queen Charlotte Inn which meets once a month to bring local veterans together. After a great breakfast the VIA Team took veterans on an off road experience day on the Salisbury Plain using the designated paths and byways across this vast training area.

This off road experience is part of an ongoing project called Veterans Expeditions Overland where the VIA Team and many veteran volunteers stripped and built 4 Land Rovers and prepared them to expedition standard.

These vehicles were then used to undertake an overland expedition with a group of veterans suffering from Post-Traumatic Stress Disorder (PTSD) driving from the UK to Greece and back, a journey of 7,500 miles passing through 15 different countries over a 42 day period.

What is…..Veterans Expeditions Overland? See below:

The ongoing project is what was undertaken over the weekend on Saturday and Sunday. Former Royal Engineer and Love Andover director Mo Sweeney who took part on our expedition last year as he suffers from PTSD also took part this weekend as he has been going through some difficult times lately which has set him back.

VIA Chief Operations Officer Billy MacLeod said, “It was important for us that Mo was involved at the weekend as after meeting with him at the VIA offices this week it was clear he had stepped backwards.

“This is something we often see and it is important that veterans can reconnect to the place they feel safe working alongside their peers. This is for us is what these weekends are about so that veterans know they can dip in and out as their needs warrant and we are always ready to help”.

Mo also took part on the off road experience on Sunday alongside a military family who have been going through some difficult times and the experience was very positive for the whole family.

Serving soldier and father of the military family said, “The weekend was fantastic and a really good bonding experience for the whole family after the stresses of military life a weekend like this helped bring the family together.

“The wife of the serving soldier got to experience something that she would never normally have put herself forward for and found a new niche and interest in life. The children being too young to drive themselves thoroughly enjoyed the cross country adventure that would never have got to see alongside their parents and the VIA Team which included meeting some donkeys on one of the planned stops”.

Billy MacLeod added, “The work we do at VIA is about normalising behaviour which can take time as there is no quick fix for mental health what veterans and families need is to be able to build trust and to tap in to what becomes their safe place and that is what VIA provide.

During the VIA expedition in 2018 whilst travelling through a remote area of Bosnia one of our vehicles called CHRISTIE was involved in accident and left the track rolling 7 times down a hillside. Everyone in the vehicle was fine due to the hard work put into building the vehicles but the vehicle was a right off. A local village of Parsovici took the team and looked after the team for several days whilst plans were made to carry on with the expedition.

The vehicle had to be left behind in Bosnia whilst the team carried on with the expedition but in December the VIA Team returned to Bosnia to pick up the vehicle but die to the generosity of the village the VIA Team set up an online donation page to purchase items for the village school and these were handed to the school on the rip.

The vehicle has now been returned to Andover and the team are preparing to REBUILD CHRISTIE but as with everything funds need to be raised to do this. Please note Love Andover does not raise money on behalf of VIA, but if anyone would like to make a donation towards this appeal they can do so on the following address:

Once completed this vehicle will be used to help more veterans and their families overcome the effects of war, to put this into perspective, 78 veterans and serving personnel took their own lives during 2018 and there have been 9 so far this year.