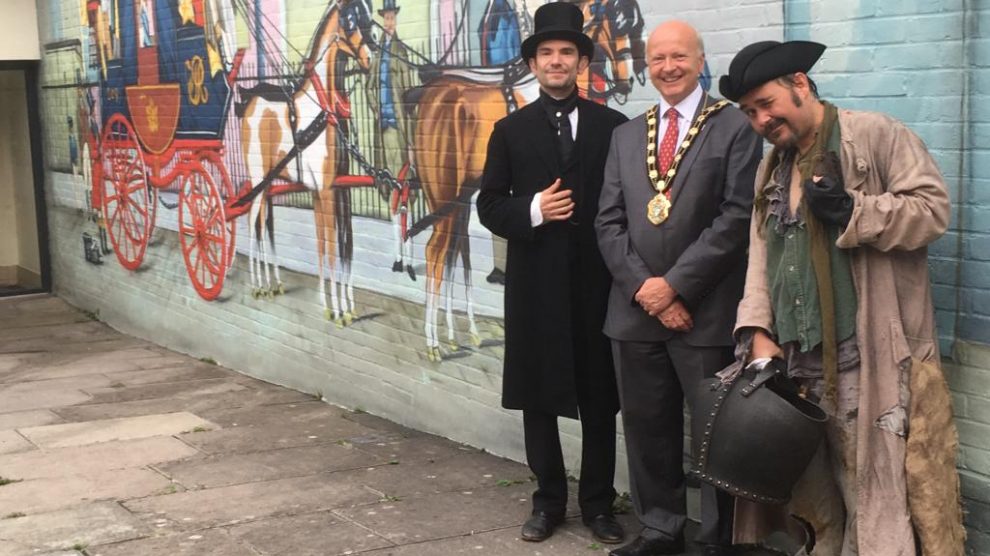 The first, in the courtyard of the Angel Inn in the High Street, depicts a scene from the courtyard as it would have been at the height of Andover’s boom as a coach stop in the nineteenth century.  The area would have been bustling with coaches, horses and people stopping to rest and get refreshment before continuing on their way.

The second mural is of a person imprisoned in the Old Gaol in Bridge Street, a shadowy figure reminding us of the dark history of that building.

Councillor Martin Hatley said: “I was delighted to partake in the unveiling of these two striking murals and the fascinating historic walking tour.  As well as making Andover’s history more visible, the murals make a lively and exciting addition to the environment of the town centre and will hopefully encourage more residents to appreciate the interesting heritage that the town has to offer and perhaps explore the Heritage Trail for themselves.”

Leader of the Council, Councillor Phil North said: “It is very pleasing to be able to celebrate Andover’s rich history as a coaching town in such an accessible and attractive way.  Funded by developer contributions, the new Angel Inn mural in particular is a striking addition to the town.”

Both pieces were painted by Peter Barber, a professional mural artist, who is known for taking on big commissions throughout the country.

Peter said: “The designs celebrate the heyday of the Angel Inn and Andover’s importance as a coaching stop on the route to the west country.  A trompe-l’oeil, the design puts you in the imagined bustle and excitement of the Inn’s courtyard as passengers prepare to board the London, Exeter and Devonport “Quicksilver” mail.  Details of the route and stopping times shown on the adjacent walls are taken from ‘Stage-Coach and Mail in the Days of Yore’ by Charles G. Harper, Chapman and Hall, London 1903”.