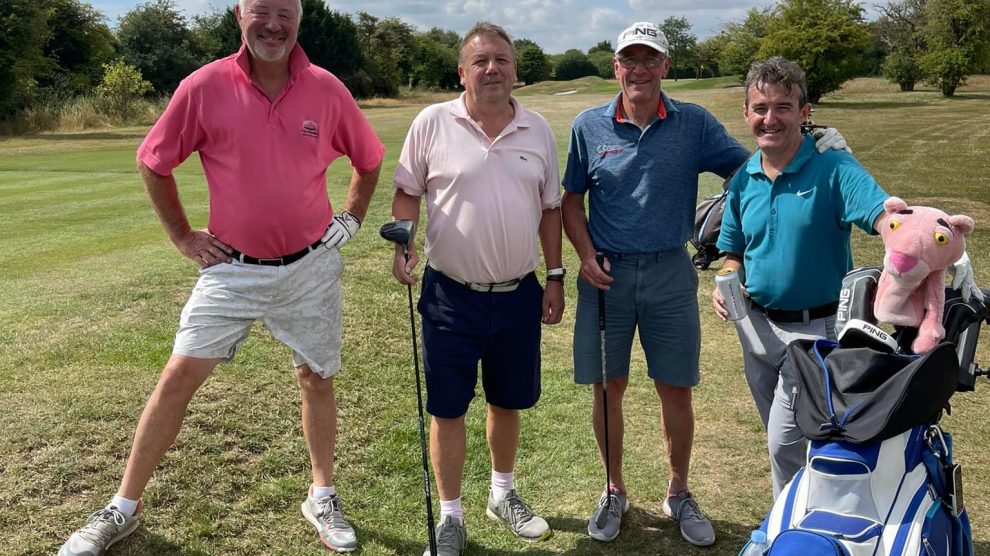 The annual Alan Potter Charity golf day was a roaring success again as a total of £10,000 was raised for Prostate Cancer UK.

A total of 21 teams of 4 competed on a glorious day at High Post Golf Club. The teams compete in Texas scramble over 18 holes, a combined team medal round to record one score for the team.

The event raises money through sponsorship from businesses, raffle prizes and an auction but also to raise awareness of Prostate Cancer.

In the UK, about 1 in 8 men will get prostate cancer at some point in their lives. It is the most common cancer in men in the UK.

Andy himself later in 2005 found that he also had Prostate Cancer after having a PSA test in which he asked for in the wake of Alan’s passing. Treatment started in 2006. Andy unfortunately passed in 2018 from Leukaemia.

The event was intended to be a one-off event to raise money and awareness. The event was a huge success and raised £12,000. Such was the success that the event has been held every year since, (apart from 2020 and 2021 due to the pandemic). In total the events since 2007 have raised over £158,000!

Simon Potter told us “This is a great event getting people getting playing golf having fun and raising money for Prostate Cancer UK. Though the most important part is raising awareness about Prostate Cancer. Traditionally us men we tend to not go to the doctor for any problems or talk to any one for that matter about our health. We hope it will eventually go away.

“By doing this event we help continue the great work of Prostate Cancer UK. I would ask every male out there that if you ever have to go for a check-up or have to give blood is ask for a PSA test”.

The PSA test is a blood test that measures the amount of prostate specific antigen (PSA) in your blood. PSA is a protein produced by normal cells in the prostate and also by prostate cancer cells. It’s normal to have a small amount of PSA in your blood, and the amount rises slightly as you get older and your prostate gets bigger. A raised PSA level may suggest you have a problem with your prostate, but not necessarily cancer.

There was a huge sense of community spirit throughout the whole day ands the day doesn’t come without a touch of competitiveness as 2 trophies were up for grabs as the Kingman Cup which is won by the best score over the first 9 holes was won by Ashley Brown and his team. The Alan Potter Cup which is the overall winner was won by the team from Test Valley Windows.

The event wouldn’t be possible without the hard work Simon Potter and his friends and family put into the event, the businesses who sponsor and supply prizes for the raffles and auction and of course the players who turn out to support this brilliant event.

Next year’s event is already in the works with a date of 3rd August set and if you would like to be part of this day weather playing or sponsoring then get in touch with Chris Bradbury by emailing thealanpottergolfday@gmail.com