Local businessman Kevin Farrer used the attention of his Magistrates’ Court appearance yesterday to brand a fellow councillor a “traitor” and the rest of the borough council “hypocrites“.

Mr Farrer, owner of International Furniture on Black Swan Yard was in court to be given a liability order for non-payment of the Andover Business Improvement (BID) levy. Payments were due at the beginning of May this year.

Mr Farrer used the platform to resign his position as a borough councillor and brand fellow Test Valley independent councillor David Coole a “traitor”. It is understood he will remain as an Andover town councillor.

However, Cllr Coole has been happy to line his own pocket with BID money, having recently received £2,000 of their money for his involvement in this weekend’s Andover Festival of Motoring.

The Anna Ward councillor made what was an unexpected appearance at Basingstoke Magistrates’ Court yesterday, in an effort to profess his support for Mr Farrer, which prompted a verbal challenge from the furniture shop owner of, “What are you doing here? Traitor.”

The BID was voted into existence in November last year. It will use money from levy payers to ‘improve’ the town. Recently the BID have announced a waste charter and has released a tender for companies to propose free Wi-Fi for the town centre area which will be used to collate footfall data and provide businesses with a marketing platform.

At yesterday’s hearing which was disrupted by a fire alarm, District Judge Timothy Pattinson granted a liability order against Mr Farrer for non-payment. The process employed by the original BID Steering Group led by local businesswoman Lisa Armstrong from recruitment agency Active Staff has been under question for some time and Mr Farrer has been a staunch antagonist in protesting against its imposition.

BID manager Steve Godwin said, “We have been and continue to work with the majority of Andover businesses, consulting with them and delivering the objectives set out in our 5-year business prospectus and we really hoped to avoid any court action through non-payment of the BID levy but it does have to be collected.

“Test Valley Borough Council is responsible for billing and collecting the levy from businesses in the BID area on behalf of the BID company”.

At the hearing, Test Valley Borough Council (TVBC) was represented by Peter Colebeck. He presented their case to the District Judge, but it appeared that the local authority needed to update their information as some businesses were no longer liable.

The former nightclub Area 51 which closed in 2015 was among the businesses that TVBC thought were still operating.

The council representative then admitted the authority have been working on information that’s almost five years old.

Mr Farrer was informed by the judge that if he doesn’t pay the amount due it could lead to a spell in prison.

On being given the order to pay, Mr Farrer said to the council representative, “I resign, I cannot work with hypocrisy”. He went on to confirm that he will be moving to Ireland in the near future.

Spats between councillors are not unusual, but the odd case of ‘Coole vs Farrer‘ had an intriguing aside.

In the courtroom, Mr Farrer asked District Judge Pattinson to read what appeared to be a printed screenshot a Facebook post by Cllr Coole. When Cllr Coole was later shown the same sheet of A4 an observer commented, “His face went ashen and he went very quiet”.

As confirmed by yesterday’s proceedings, the Business Improvement District is enshrined in law, yet Cllr Coole continues to offer that he is “working on something better than the BID“.

The Judge in yesterday’s case informed all the businesses present that because of the current legal standing of the BID (TVBC presented a letter from the Secretary of State), he was unable to consider anything other than the financial aspect.

It appeared that Test Valley Borough Council were also confused by their own process. Tenant of The Globe Inn on the High Street Andy Rogers who was also at the court commented that as he holds a ‘Tenancy-At-Will’ (TAW) agreement, he didn’t see it as fair for him to pay the whole levy upfront, as he could give 24 hours’ notice of termination.

He expressed that he had tried to offer to pay in monthly instalments but was given “a resounding no” from the borough council.

The judge asked Mr Colebeck if he had any issues with payment by instalments, to which the TVBC representative said that instalments were acceptable.

District Judge Pattinson having considered all the available information, stated to all present that regrettably, because of the letter from the Secretary of State, all he could do was enforce the BID levy and that the businesses would be receiving a liability notice.

Andover BID Manager Steve Godwin told Andover Radio, “The BID is a way for local businesses to be represented, to work together to decide and direct what they would like in their area and to have a strong voice in issues affecting their trading area.

“The BID levy money is ring fenced for use only in the BID area and is directed at helping the town to compete through helping to increase footfall and spend.” 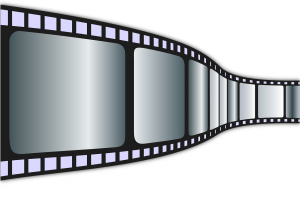 Andover cinema back open for business 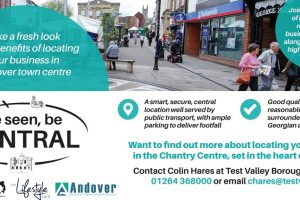 Be Seen, Be Central and boost business 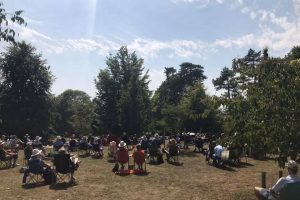 Performances in the park hit the spot