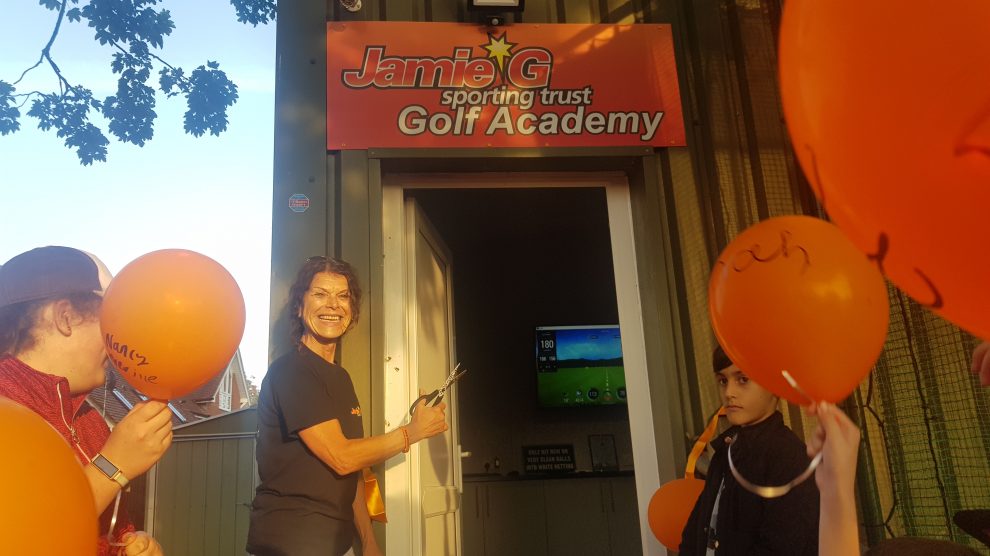 A new a high tech golfing academy was officially opened at Andover golf club on Saturday 9th October that looks set to be of a huge benefit to the community and future golfers.

President of Andover Golf Club Mark Gates told us “It’s been a long time in the making, it’s taken about 8 months but we are delighted that the indoor Jamie G driving range open. We have also named the junior section after them, so it’s Jamie G Junior Academy so it’s looking to promote children into golf at an introductory level”.

The new facilities that include an indoor VR driving range will help students learn off the course in the winter months Mark said “There’s a track man and a big screen with a net behind so that students can see where their ball would go on a variety of renowned coursed around world like pebble beach. From that the coach can then coach them on how they shot and improve on that. Just a really top of the range coaching tool”

This new academy is hoping to introduce children to the world of golf using the new equipment Mark added “Back in the day, wind, rain or shine you’d be out hitting balls in the field but now with technology they wouldn’t want to do that, so going inside and seeing a screen and playing virtual golf as well as actually swinging a club and playing for themselves is a good combination of the two things. Brings our golf club into the 21st century.

“Jamie G Trust have been a close working companion for a few years and has come on leaps and bounds and now with this we have facilities is equal to any club in the country.”

Terry Gosden the club professional is just as excited to be able to get into the teaching with this new academy. He told us “The tech we got can be used for fun games like closest to the pin and then with more experienced golfers where they see their swing speed and can see their numbers on the screen and aim to improve based off of that. It’s great for beginners but excellent for the advanced”.

Speaking on the potential of the Jamie G Sporting trust academy Terry added “It gives me the opportunity to coach in the winter when the weather is not too good so we can always do some coaching as well as outdoor coaching”.

Speaking with Andover Radio Jacqueline Gentleman said “It’s very exciting to cut the ribbon to launch the Jamie G Sporting trust Golf academy. It’s getting the youngster’s to keep a healthy lifestyle in a fun way. Terry started the academy a few years back in a small capacity and since launching it today has had about 50 new members already join. So hopefully we can see the academy spreading further afield”

Chairman Tommy Gentleman added “On a personal note it’s great being out there making a visible impact again and that’s important because with everything that has gone on. It’s a statement to the local community that we are motivated to keep giving back to our local community. From the chairman of the trust, this is Andover Golf club, it’s not only a sporting influence in our town but they are a fantastic local stakeholder for us. We know that they have fundraised for us before and will continue in the future. It again echoes the intention we have as a charity to continue to increase participation amongst young people in sport in this fantastic community. We’re here making a difference”.

The day started at 1pm with 11 juniors with handicaps  playing 18 holes of golf for the brand new junior captains day champion cup, which was sponsored by the Jamie g sporting trust.The cup was won by Bray Jones with a fantastic round of nett 67.

At 3pm they had 13 more youngsters without handicaps play a 6 hole competition and a 3 hole competition. This was won by 6 year old Tucker Jones, brother of Bray.At 4pm arrived 14 more small academy children who played in a 3 hole fun team event.

Terry Gosden had 38 youngsters playing golf and all of them received a prize at the presentation at 5.30pm

Thanks to the Jamie G sporting trust the kids now have a fantastic warm indoor room to improve their golf over the winter months.

Terry Gosden came to Andover golf club back in a April just after the lock down Terry told us “The club had just 7 junior members, l am extremely proud to say we now have over 45 juniors all active and having great fun in the fresh air”

Kids academy coaching is Saturday afternoons, what ever the weather. So if you fancy trying this great game please contact golf professional Terry Gosden at Andover Golf Club.