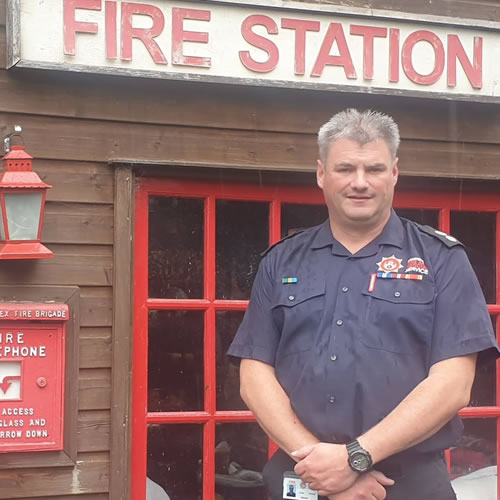 At 6ft 2ins, a strong and confident firefighter of 30 years, you really wouldn’t suspect that things could upset the happy-go-lucky Anna Valley resident.

To explain his initial feeling of depression six years ago, he adds, “I was just having a funny turn.”

Kevin joined the Fire Service aged 18 and has experienced more than his fair share of life’s tragedy.  But it took a full emotional breakdown in a fire station locker room in 2014 for Kevin to begin having conversations about how he was feeling.

“I just never thought depression was ‘a thing’” he says.  “I was sceptical about mental health issues.  When people said they were off work with stress I just thought they needed to ‘man-up’ and get on with life.  Just smile and it will go away”.

Tomorrow is World Suicide Prevention Day (Thursday 10th September 2020).  In 2018 more than 6,800 people died of suicide in the UK and Ireland.  Today, the committed Watch Manager from Andover is happy to share his experiences to help prevent feelings of depression and suicide in others.  Kevin says its important to spot early signs to identify those at risk of suicide.

“One day at the end of my shift I simply hit a brick wall” said Kevin.  “I ended up curled up in a ball, sobbing my heart out.  I had no idea what was going on, what was happening or what I should do.”

His experience in that locker room six years ago was spotted by the fire chief who made Kevin talk to someone immediately.  Talking to a counsellor on the phone, Kev began to unravel the way he was feeling.

“One of the first questions they asked was ‘have you thought about suicide?’” says Kevin.  “They then asked questions about sleep patterns.  Because I was working shift work my sleep patterns were already mucked up.  I had done it for so long, but would find that I was falling asleep in the afternoon, not really sleeping at night and waking up the following day tired.  Before I knew it I was physically and mentally exhausted.”

The firefighter adds, “When you get dark feelings inside it just drains you.  You feel tired all the time and you can’t work out why.  Explaining how you feel should be the first thing you do.

“In the earlier stages I had no idea what was happening and talking to someone was the best thing I did.  Talking to someone and breaking down everything I was thinking was really helpful.  Initial contact with someone to spill the beans was helpful.  And when I spoke to a doctor and a medical profession told me I was suffering from depression for the first time it became very real.”

Today there is now much more evidence that suicidal behaviour is a condition in its own right, not just a psychiatric matter.  Serotonin is a drug produced by the body which is like a natural drug which balances levels of happiness and sadness.

“If you are feeling down or at rock bottom, the body just can’t produce enough Serotonin to keep you stable,” says Kevin.  “Initially I didn’t want to take any medication, I thought they were just ‘happy pills’  but when it was explained clearly to me, I began to understand the body’s natural way of working.

“Today I would say to anyone, if a medical professional suggests medication, take it.”

The firefighter had to take time off work in 2015 and used his time and practical skills to build an award-winning garden shed in the style of a Fire Station.

“Winning that award gave me a real pick up, a real buzz.  It gave me a real sense of achievement and importance.”   The shed is used for charitable events and has recently raised £600 for Andover Mind, while also raising enough money to install a defibrillator at Highbury Road, Anna Valley.

Kevin has since appeared in a series of national advertisements for the NHS Every Mind Matters campaign.  He continues to offer assistance to people who may begin to feel they are suffering a downward mental journey.

“I think as we come out of lockdown there will be people who have lost relatives but have not been able to attend funerals.  That is going to be a problem, people will not have had a chance to grieve properly.

“If anyone is feeling down, or feeling different, they must talk to someone even if it’s a friend or colleague.  You just need to talk to someone.  If dark feelings are spotted early, suicides will be prevented.”

You can read more about Kev’s story in this week’s Love Andover Observer and hear a full interview with Kevin Francis talking to Andover Radio’s Graham Kemp below: