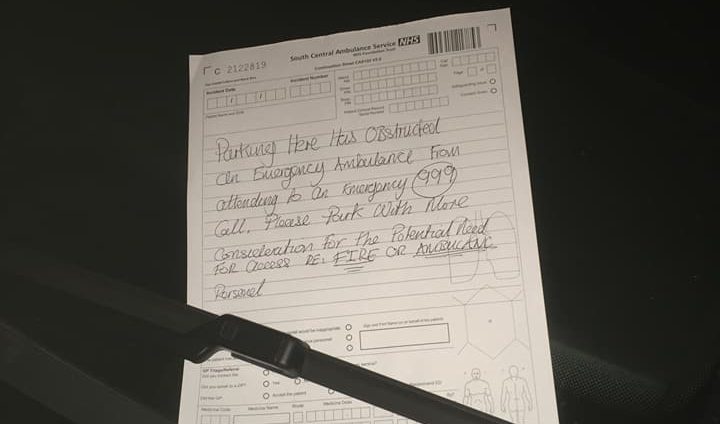 An emergency ambulance was delayed getting to an Andover lady in the early hours of this morning because of inconsiderate parking.

Lauren Pinhorne from Camelot Close called 999 around 4am but the ambulance was unable to weave its way through vehicles parked on the estate.

In frustration, South Central Ambulance crews were sure to make the vehicle owner aware of the problems caused by leaving a handwritten note on the windscreen of the offending black Volkswagen.  A blue car parked opposite also seemed to be part of the problem.

The politely handwritten note reads, “Parking here has obstructed an ambulance from attending to an emergency (999) call. Please park with more consideration for the potential need for access re. FIRE or AMBULANCE personnel.”

Sharon Miles commented on Spotted in Andover, “I got woken up at 4am this morning… because the AMBULANCE could not get through the gap because of inconsiderate parking.

“Just look and think before you park. A gap might look big, but potentially not for a larger vehicle.

Mark Wearn added, “Problem is too many cars. When this estate was designed most residents would only have one car a household, now the norm is at least two or three, simple maths really.

“Having said that so many people park like utter idiots without any consideration to others or the emergency services. Offending vehicles should be towed and heavy fines issued to offenders.”

“They may think it’s a big enough gap for a car but they don’t think about emergency services or delivery vans getting through.

“Garage rents have gone up so people have given them up, with more people parking on the estate now than in a garage.

“Also the council should know what parking is like and should revise parking [controls] around here, there are plenty of wasted areas they could use.

“The council have done a few car park extensions but not enough for a growing community that obviously has more than one car per household.”

Lauren Pinhorne, who suffers from epilepsy and related symptoms which means she slips into a coma-like state says, “The ambulance was for me and they did get to me in time – not that I remember a lot – and I am on the mend.

“It seems that Aster and the Council neglect the issue all over Andover, yet are quick to issue fines.  I think a few of us need to complain consistently in writing.”

She exclusively told Love Andover, “Parking is an area of concern that needs a complete shake up and reboot – and I know that residents are consistently growing frustrated. It’s even causing arguments between neighbours, friends and family.

“As for the ambulance not being able to navigate around the area, luckily my emergency wasn’t life threatening – just high priority.  Should it have been more serious or someone elderly, they could be looking at contributing to local deaths.”