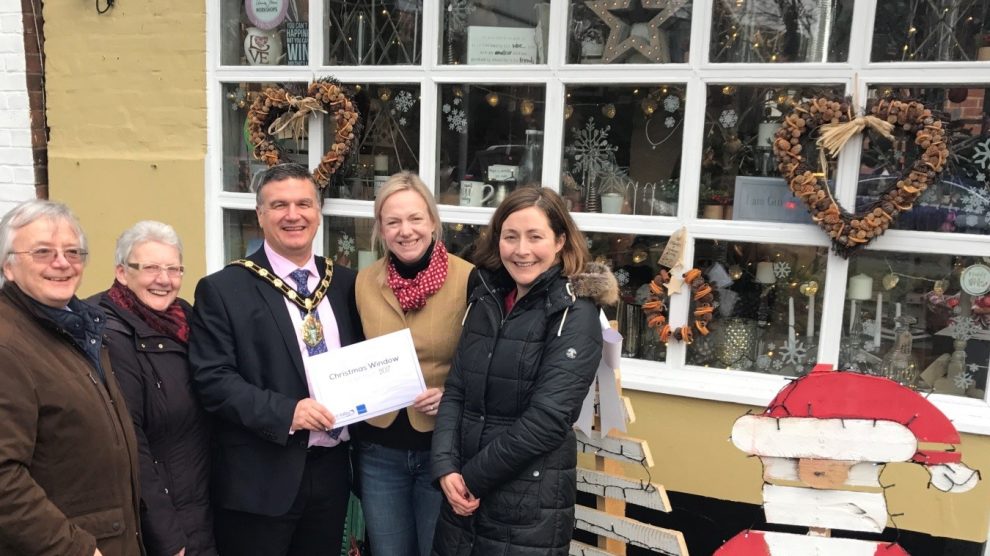 Shop owner Stephanie Briggs said, “We are thrilled to win the window competition, our team have had great fun and worked hard putting it together and it’s lovely to have recognition for our efforts. Thank you very much and Merry Christmas.”

Despite a record number of businesses taking part and a very high standard of designs, the judges unanimously agreed that La Di Da Interiors at the rear of 34 Bridge Street were worthy winners.

Judges were also particularly impressed with last year’s winners Mooch and Jim’s Barbers who were awarded joint runners up.

The Mayor presented Stephanie with a cheque for £50 for their chosen charity – Border Terrier Welfare UK saying, “It was lovely to see so many beautiful window displays adding to the festive feel of the town, although this did make the judging a real challenge.

“Well done to everyone who took part and congratulations to those highly commended and the winner.”

Andover Town Centre Manager Gemma Thompson added, “Thank you to all of the town centre businesses who have made the effort to make the town centre so festive. Our congratulations go to the team at La di da Interiors who created the winning window display. The judges were very impressed by their stylish and eye-catching design”.

All businesses with festive windows displays, including the impressive annual showcase from International Furniture were considered for the competition.