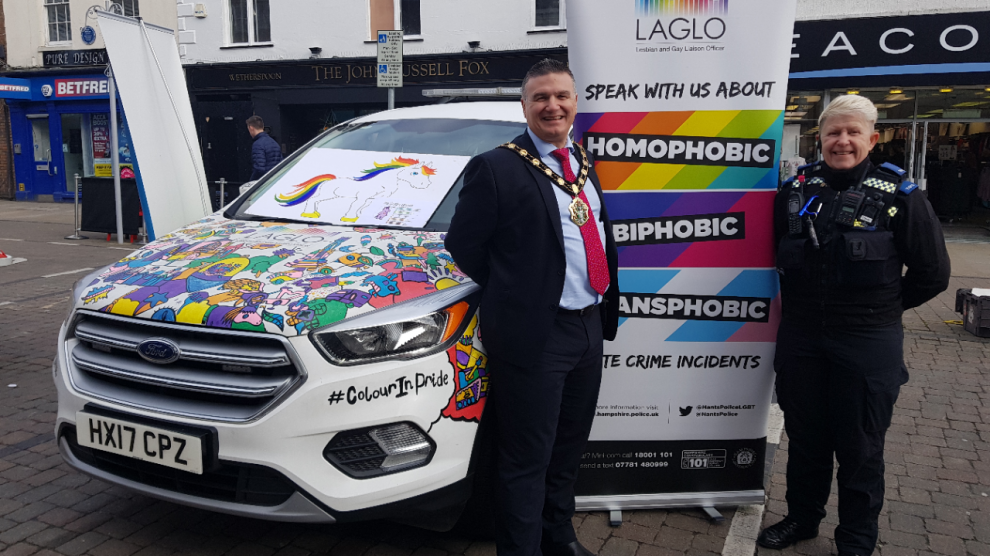 Andover’s youth LGBT group has made a colourful entrance to the High Street today.

An operational police car was on show to promote the town’s new LGBT support service, provided by Breakout Youth.  The vehicle was hand-painted by young people from across Hampshire and the Isle of Wight.

Hants Police LGBT and and the Mayor Test Valley, Cllr Carl Borg-Neal, were part of the display today to promote the reduction in hate crime relating to those who identify or are questioning their sexual identity.

Hampshire Police PCSO Lee Thubron said, “Today is about raising awareness in Andover that there is support for people who identify as LGBT.

“The response in Andover has been really positive.

“Today is really about Breakout Youth, a charitable organisation which works with people aged 13-21. They’ve recently set up a group for young people, so they have somewhere to go and meet new people and get the support they need.”

Breakout Youth is part-funded by Test Valley Borough Council and offers weekly social groups that meet fortnightly at safe locations where like-minded young people can socialise safely. The groups mean young people can get help with feelings of isolation and confusion.

People wishing to find out more about Breakout Youth can visit www.breakoutyouth.org.uk.

Hampshire Police are promoting tolerance: if you or someone you know has been the victim of a homophobic or transphobic incident, you can report it to them.  Hate crimes include any acts of violence, harassment or verbal abuse.  Hants Police say, “The more we know about it, the more we can do about it.”