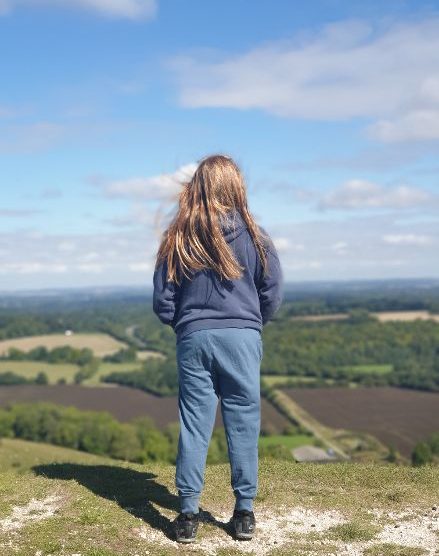 Local Andover School boy Cooper Ritchie-Green has achieved his goal of donating his hair to Little Princess Trust, while raising over £800 (and counting) for Macmillan Cancer Support in the process.

Cooper has always been 100% true to himself. Never one to attempt to fit in with the crowd, his family and best friends love him for his kindness and sensitivity, as well as his often comic eccentricity.

So when he came home from school back in early 2018 and said “did you know that you can donate hair to make wigs for kids with cancer?” I knew we were on the cusp of a Coop crusade.

The Little Princess Trust said that they struggled to find donations for their longest wigs, so from the outset Cooper was determined to grow his hair to their longest required length.

Cooper never really cared what his hair looked like, looks don’t define people for him. But even without trying, Cooper’s long hair did become a huge part of who he was, simply due to logistics! His football coaches at Andover Town Youth FC had to start carrying hairbands as part of their kit bag just in case Coop forgot his. But he only really put it up for playing football, preferring just to let it do its own thing, the perfect metaphor for Coop’s own approach to life.

If only we could have had a £1 donation every time someone had mistaken Coop for a girl in the last few years, we would have probably doubled our fundraising! None of us, Coop included, were ever perturbed by it though. Cooper is so comfortable in his own skin that he often wouldn’t bother to correct people when they’d got it wrong.

Eventually his hair reached the 36cm he was aiming for, so last weekend, Cooper had his hair cut for the first time in nearly three years.

The hair had to be washed and dried and divided into ponytails. Cooper’s step mum, Roxanne Watts from Escape Beauty, gave him his new hairstyle after me and his dad, Stevan Green, had each cut off a pony tail.

Cooper’s hair has been donated to Little Princess Trust, but he chose to have monetary donations go to Macmillan. Like many families, we have witnessed far too much cancer, and his grandad is currently living with it.

Cooper maintains that he never experienced any negativity about his long hair, even when he started year 7 at Winton in September. But there is no doubt that doing this has forced him to stand out from the crowd in a way that has been hard for him. When I asked Coop for a quote for this piece, he said, “Don’t let other people put you down about what you want to do.” I think this is advice that we can all try to live up to.

Cooper is accepting donations to Macmillan at his just giving page: https://www.justgiving.com/fundraising/cooperritchie-green

Thruxton continues to send Christmas love
Are they lonesome this Christmas?