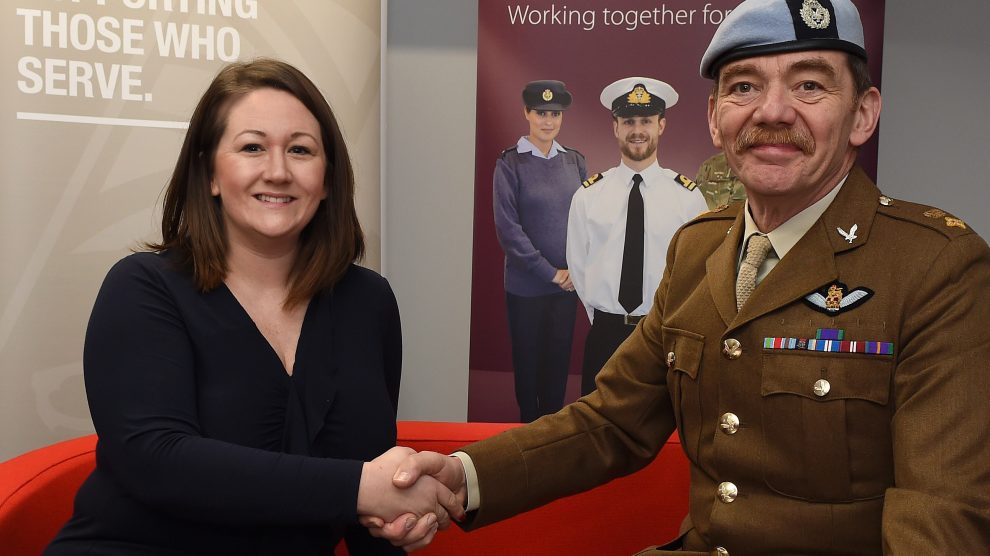 BP Rolls Automotive had the privilege of being visited today by Lieutenant Colonel Andy Birkett, Chief of Staff of the Army Aviation Centre at Middle Wallop.

Marketing Manager Louise Ellison welcomed Lt. Col. Birkett to officially co-sign the Armed Forces Covenant. The Armed Forces Covenant is a national promise to ensure that those who serve or who have served in the armed forces, and their families, are treated with fairness and respect in the communities, economy and society they serve with their lives.

After attending an engagement event in November 2017 hosted by The Army Aviation Centre and Test Valley Borough Council, BP Rolls were keen to show their support for the armed forces community in and around Andover.

The purpose of the event was for local businesses and partners to improve mutual understanding and facilitate opportunities for closer working relations, integration and partnership with the Army at Middle Wallop and other military units in the area.

Louise Ellison commented on the visit, “We were very pleased to welcome Lt. Col. Birkett to BP Rolls Automotive and hope that this will be the start of a great relationship with the local forces community.”

BP Rolls serve customers from the Armed Forces, giving a 15% discount on labour rates to serving personnel, reservists, veterans and spouses.  Garage owners felt they wanted to do more; the signing the covenant is a public pledge to continue supporting the local military community.

Lt. Col. Birkett was given a tour of the workshop and facilities at BP Rolls Automotive by General Manager Nathaniel Roach, including their state of the art Hella Gutmann ADAS Calibration system, MOT testing bays, engine diagnostics and Citnow Video technology.

Lt Col Andy Birkett added, “I am delighted to represent the Armed forces in welcoming BP Rolls Automotive into the Armed Forces Covenant scheme. Middle Wallop has a long association with Andover and I’m pleased that our event in November brought us together with BP Rolls and other Andover organisations.

“The discount that BP rolls Automotive are offering is a generous recognition of the service of Armed Forces personnel and our Veterans. We look forward to working with BP Rolls and other Andover companies to further the principles of the Covenant.”