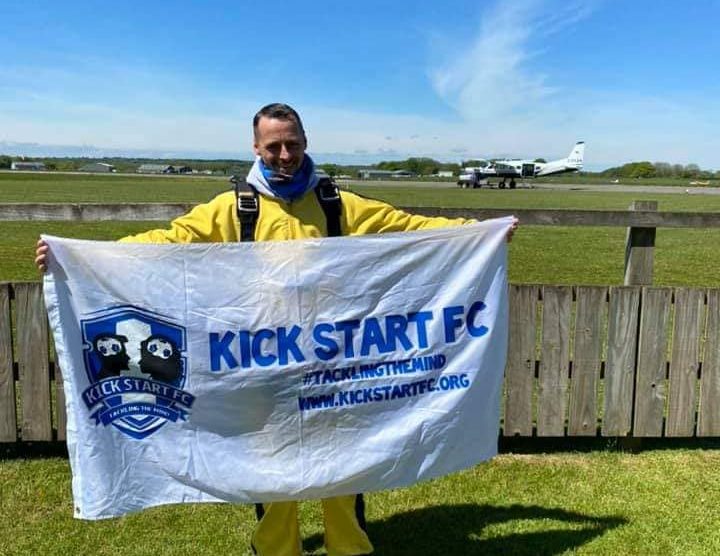 On May 27th, Andover resident Ben Hammett-Brady soared in the skies and raised £1,200 for KickStart FC, by sky diving from 15,000ft.

Ben who works as a warehouse and logistical manager in Andover took on the challenge to raise money for local charity KickStart FC. Kick start FC are using the power football to help with their mission by hosting weekly football sessions where both men and women over the age of 16 can come and play football. The football sessions are designed to help improve peoples mental health, their physical health, their social lives, their self-esteem and their overall outlook on mental health. The organisation have really made a difference as Ben went along to one session and saw the benefits and joined the team soon after to offer his support.

Ben told us “The reason was I previously and still suffer from depression and I went along to the KickStart sessions to meet like minded people who would understand my struggles, within a few sessions it was clear that I could help some of these people so I joined the KickStart team and instead of participating in the sessions I took over running them, I found that helping others helped me.

“I wanted to raise money for kick start because we want these sessions to be free for people, I could see how much an hour a week meant to some of the guys and girls it was a easy decision to raise funds for this amazing cause and to continue doing what we do as a self funded charity.”

You can still support Ben and KickStart FC and donate via their Just Giving page.

This is not the first time the organisation has had some brilliant fundraisers, fellow participants have also took the step to raise money and awareness for this brilliant charity.

Kick Start FC have developed quite quickly and the support they offer has helped many. Their men’s and women’s footballing sessions which started in Tidworth now have sessions in Andover and they also hold walking groups too. To find out more you can visit their website or their Facebook page.