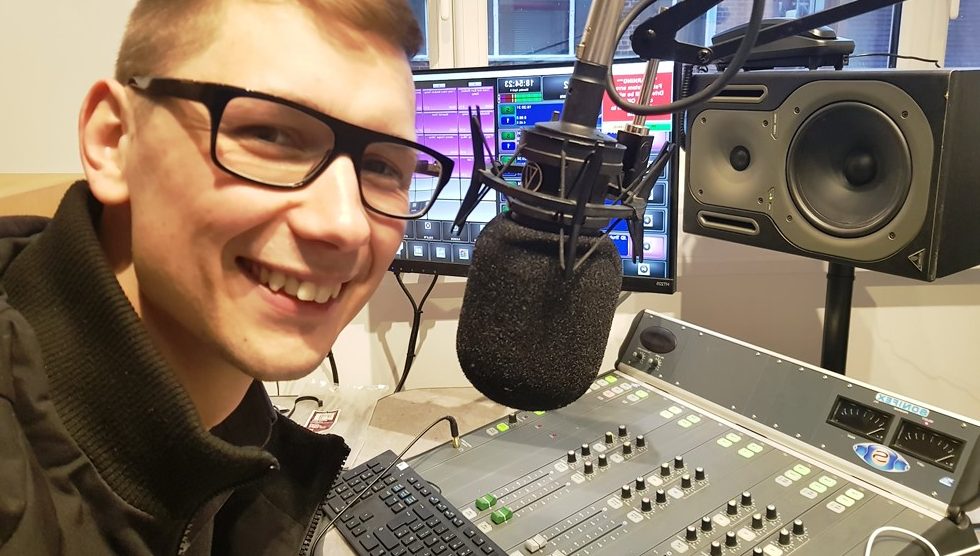 ‘Alex Krupa’s Country Show’ on Andover Radio has been shortlisted for a national radio award.

Alex is up against four other specialist programmes, with over 40 other radio stations across all categories.

“I’ve never been involved in radio before”, says 26-year old Alex. “I fell into it by accident by playing live gigs and meeting people. So the closest I’d got to radio was listening to it.

“I still remember my first live show on air. Feeling like a huge loudspeaker to the community I live in. And having my huge passion for country music gave me the opportunity to express that to a broader audience.

“Bringing together a local-nationwide community within country music across the UK. Through this I’ve met people who are starting up in the industry and we’ve hosted interviews, connected people through social media and created podcasts with my producer Samantha Melrose.”

The award ceremony will be in South Wales in late October where other local radio stations will be vying for a coveted industry award.

Both Alex and Samantha have a close connection with the country music. Alex is pursuing a solo career with his debut album ‘Drunk on the Speakers‘ which was released in June. The team also run country music podcasts which highlight country music events, companies and upcoming artists.

Producer Samantha says, “The show covers a huge range of music from Country Pop to Americana to give as much exposure to the ever-growing genre as possible. Each week we dedicate time to upcoming, and unsigned artists from the area in a ‘Who to Watch’ segment.

“Having personal experience with trying to break through into the music industry allows us to empathise with how hard it can be as an unsigned artist. Allowing these artists be heard on a larger scale is something both of us are particularly passionate about. We also stay in contact with artist each we’ve made a connection with.”

Major artists like Canaan Cox and Zoee are regulars on the programme and having being able to keep up with their successes is such a rewarding experience.

The award will be given to the programme which shows and understanding of a ‘real passion and knowledge for their music’ and how it ‘engages with or compliments the local community’. Organisers say they are looking for a programme that ‘showcases local artists within the genres, or ways the local community to enjoy the music, as well as shows dedicated to promoting local, unsigned or live music’.

Alex says, “We want every listener to feel as though we’re speaking to them personally and that we’re taking them on a journey with us. So, having requests sent in and having people engage with topics we’re talking about makes each show really rewarding.

“We take time outside of the programme to engage with our listeners on social media as we want everyone to be a part of the ‘family community’ that is country music.”

Alex Krupa’s Country Show is broadcast live every Wednesday evening at 8pm on 95.9FM Andover Radio and is available for ‘listen again’ on several platforms. Alex has been with the local radio station since it launched in April last year.

Station director David Harber says, “His passion shows he really understands and adores the genre and he puts every effort into ensuring listeners experience and learn something new during is programme.

“This is a great accolade for hard-working Alex, but we are prepared that bringing Alex’s engaging tone and natural skill and knowledge to a wider audience means he will be ‘snapped up’ by a larger radio station in the not too distant future.

“Alex introduces listeners to a new or perhaps understated feel to country music. As he would say, if you tune in, he’ll ‘show you what it’s all about'”.

Samantha adds, “We’ve worked really hard together to build the show into what it is today. We dedicate hours of hard work into every single show and have created relationships with PR companies, industry professionals and artists from the ground up. This has meant that we’ve been able to run a few competitions so our listeners can attend events that previously may have been unknown or inaccessible.

“We also run open mic and country music events in Andover to get the community together”.

Alex’s passion for music is what drives his endless enthusiasm and energy. “I don’t run by a script so we don’t douse the authenticity of the broadcast”, he says. “To make the listener feel like your sat having a cup of tea and a chat in their own front room. Being comfortable yet engaging is the valence I try to create on air.”

Is this the beginning of the end for Andover town council?