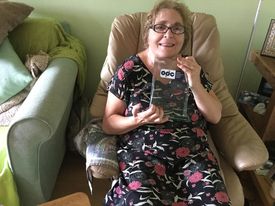 Bobbie Coelho, from Andover was diagnosed with Parkinson’s disease in 2002. In 2016 she published a book called ‘Journey through Parkinson’s disease’ the book is a collection of poems which delves into the darkness of how having Parkinson’s disease affects Bobbie, she describes her journey, feelings and emotions, in hope that people will have a better understanding and awareness of this hidden disability.

As there is no cure for Parkinson’s, Parkinson’s awareness week is an annual opportunity to raise awareness and much needed funds to support people with living with the condition, to improve quality of life and to ensure that people live better for longer.

Bobbie Coelho Knows only to well how this affects her, she told Andover Radio 95.5fm “I hate Parkinson’s: it affects every bit of your life. The worst thing is when I can’t talk. It’s not like that all of the time, but it’s particularly awful, especially since I like talking, but the worst thing is that I was treated like an adult ,who knew what she wanted, and, suddenly, I’m a moron. I don’t understand it”

If I fell in the street would you stop and ask why?

Would you pick me up and help or walk leisurely by?

If you saw me walking awkwardly wrong

Would you label me as drunk and say I’m not strong?

Or ask with a smile totally at ease If I suffer from Parkinson’s Disease?

Would you offer a helping hand?

Would you help others to understand?

Parkinson’s is a progressive neurological condition. This means that it causes problems in the brain and gets worse over time. Around 145,000 people live with Parkinson’s in the UK. And it’s the fastest growing neurological condition in the world. Parkinson’s develops when cells in the brain stop working properly and are lost over time. These brain cells produce a chemical called dopamine. Symptoms start to appear when the brain can’t make enough dopamine to control movement properly. There are 3 main symptoms – tremor (shaking), slowness of movement and rigidity (muscle stiffness) – but there are many other symptoms too.

Bobbie says “I just want people to look at me, not saying ‘she is drunk’, but ‘she might have Parkinson’s’. People have laughed at me in the street.”

If you would like a copy of Bobbies book please email Coelho1@ntlworld.com, all monies goes to the Oxford PD centre