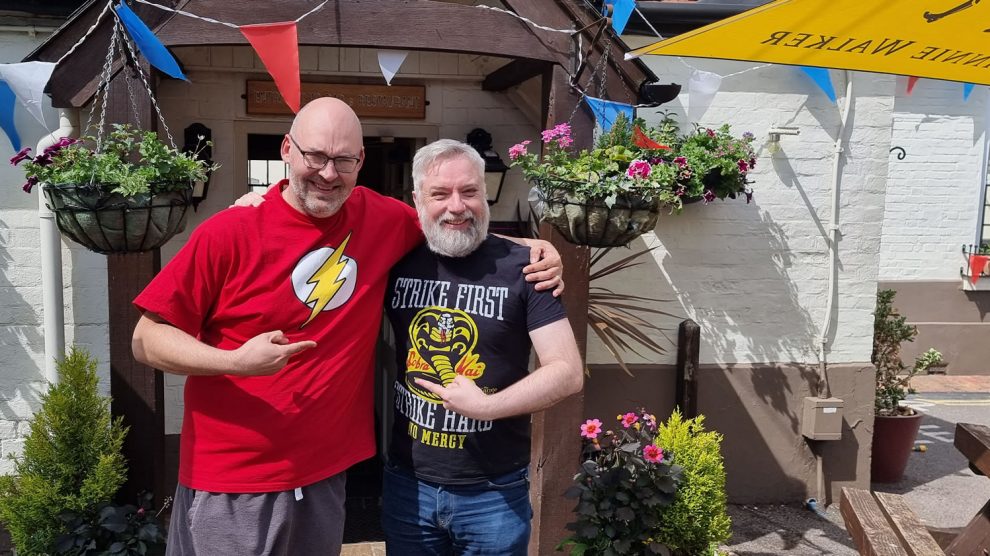 Marvel Comics artist Paul Fry and Star Wars actor Brian Wheeler will be among the guests at The Red Lion in Overton for Comic-Fest 2022.

The event is from 12:00pm this Saturday (July 23rd 2022) and will give visitors the chance to meet and chat with guests, browse an array of geeky goodies and take part in a Geek Quiz, raffle and a movie-themed disco later in the evening.

Paul Fry (pictured, left) has recently been illustrating for Spiderman 2099 as part of Marvel’s Spiderverse.  Paul tells Andover Radio, “I’m really looking forward to this event.  It’s a great way to people to come and be around pop culture, a great day for people who like comics, movies and TV shows.

“There’ll be loads to do from buying back issues, meeting the guest and looking through range of memorabilia including Funko Pop, DC, Marvel, Star Wars and Harry Potter.”

Brian Wheeler will be at the event, answering questions and signing autographs, the actor started in the film business in 1982 with his first job appearing in Return of the Jedi  where he portrayed both an Ewok and also a Jawa in the famous Jabba’s Palace scene in the film. He was more recently in the Harry Potter films as a Goblin in The Philosopher’s Stone, The Goblet of Fire, the Half-Blood Prince and Deathly Hallows Part 2.

A range of prizes will be available to win through a raffle and a special ‘Geeky Quiz’ on the day.  A special Star Wars themed BBQ menu will be available on the day with Jabba and Ham Solo Burgers as well as Moroccan Lamb burgers with a Boba Fetta cheese topping.

​The bar open is until midnight serving special Geeky Cocktails or an alcohol-free Yoda Soda for those who are driving.

Organiser Adam Butterfield (pictured, right) says “Dressing up for the event is enthusiastically encouraged, joining characters already booked in to attend the event.

The event is on from midday until 5:00pm, with a movie-themed fancy dress and Cosplay disco in the evening, finishing at midnight.

​The venue is accessible and has ample car parking, plus the number 76 bus from Andover stops outside the venue.