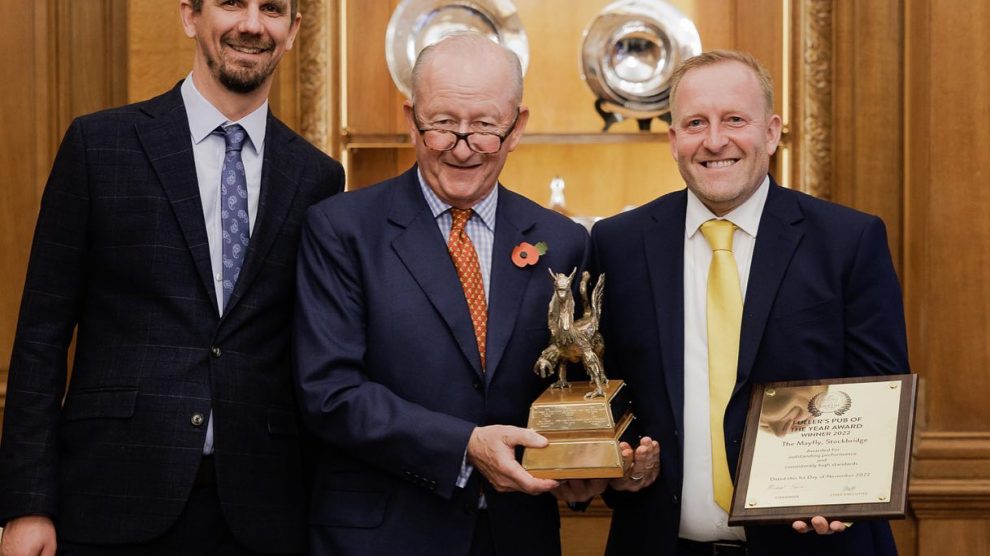 The popular Mayfly pub has won Fuller’s pub of the year competition and the companies Griffin Trophy.

Located on the River Test, the pub was judged to win against over 400 Fuller’s pubs throughout the UK. Apart from winning the trophy they also received a £5,000 holiday voucher and a staff party so that the team could celebrate.

After a number of years in Fuller’s tenanted division, The Mayfly moved to its managed estate in 2017 and an extensive refurbishment followed in 2020.

The pub has grown in strength since The pub’s manager, Darren Felvus joined in 2018. Darren has built a team of friendly and attentive front-of-house team members as well as a passionate team of chefs.

12 pubs reached the finals and they were visited by a judging panel. Fuller’s chairman, Michael Turner, chief executive, Simon Emeny, and people and talent director Dawn Browne, were the judges who selected winners for each category and the overall winner.

Michael Turner, Fuller’s Chairman, said:
“This is a well-deserved triumph. Darren and his team are truly an asset to Fuller’s. The customer service we received was impeccable, friendly, welcoming and attentive. It was a delight to watch the team as they provided such great service to all the customers.

“While The Mayfly’s outdoor space is stunning – set by a weir on the River Test – this is a pub that can be enjoyed in all seasons. There is no doubt, The Mayfly offers plenty of country charm.”

Darren Felvus, General Manager of The Mayfly, said:
“I am over the moon to have won this year’s Griffin Trophy. Last year, we were the category winner and my team and I were determined to do even better this year. I’m really proud of the team – they are all hard workers so it’s great to see this pay off. They are all going to be really excited about this award. I’ll have to find the best spot in the pub to proudly display the Griffin Trophy for the next 12 months.”