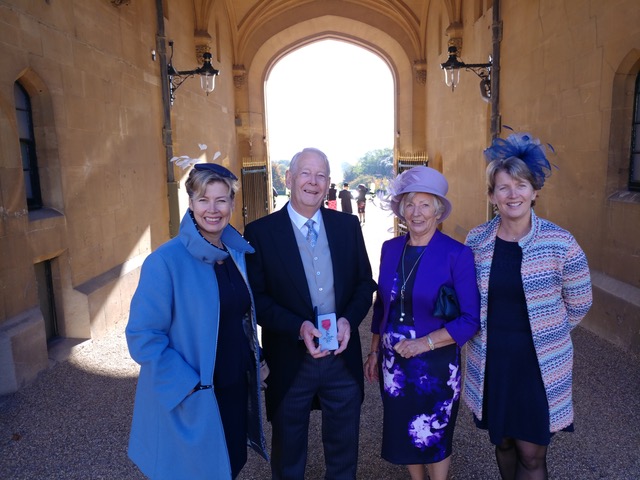 Mayor and former Leader of Test Valley Borough Council (TVBC), Councillor Ian Carr, has received his award for appointment as a Member of the Order of the British Empire from the Queen.

Earlier this month, Councillor Carr MBE travelled to Windsor Castle with his wife Beryl and daughters Joanne and Sally to receive his medal.

The former Leader’s award recognises his services and dedication to local government having served as Leader of TVBC for almost 20 years. He stepped down in May 2017 and is the first councillor from the authority to have held a separate second term as mayor which began this year.

Councillor Carr said: “To be surrounded by my family to collect this most prestigious of awards is something I will never forget.

“As I have said before, my aim when serving as Leader of the council, and now as mayor, is to serve the community to the absolute best of my ability. Being recognised with this award I hope means that I have done that and am continuing to do so. It is truly an incredible honour.”

Current Leader of Test Valley Borough Council, Councillor Phil North, said: “Ian has worked tirelessly for the benefit of Test Valley residents during his long period of service on the council – and this honour is thoroughly deserved. I can think of no more fitting way to celebrate his achievements than for him to have collected his honour from the Queen while accompanied by his family.”

Councillor Carr was elected as a borough councillor in 1987 and was previously mayor of Test Valley in 1995/96. He served as Leader from May 1999 until his retirement from the role in May 2017, making him the longest serving councillor in this role.

He became deputy mayor in May 2017 and mayor in May this year, before being appointed as a Member of the Order of the British Empire in June in the Queen’s Birthday Honours.

Some of the highlights during his time as Leader include the acquisition of Fishlake Meadows as an area for the public to enjoy informal recreation. He also oversaw the purchase of The Lights Theatre, as well as fought to secure the £2.6m from the Enterprise M3 LEP and other funding for the construction of Andover College’s Future Skills and Technology Centre.