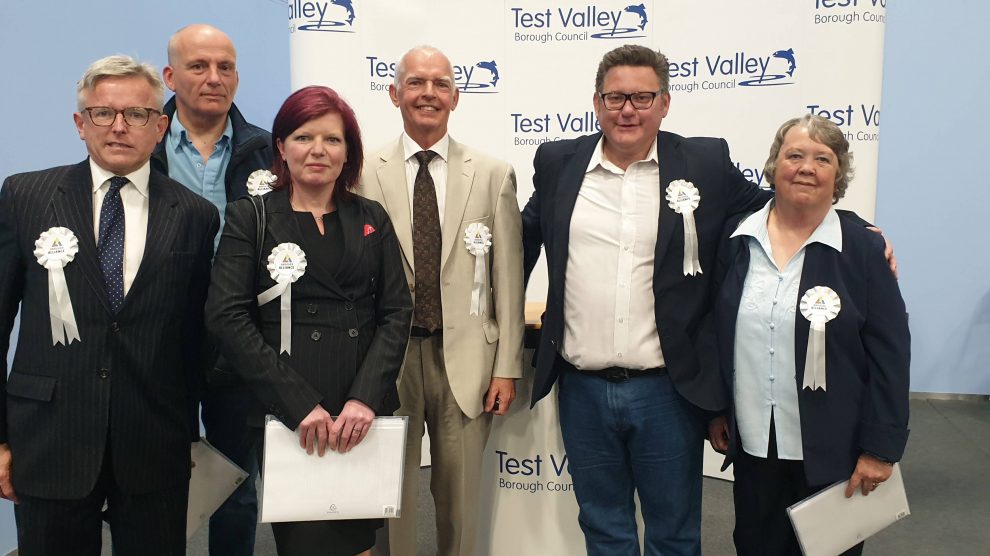 The election announcements for borough council seats finished at 5:30 this morning and a party that has only existed for little more than a month has gained seven seats at Beech Hurst, with 39% of the vote in the wards in which they fielded candidates.

The new party which encouraged voters to choose ‘local people before national politics’ followed a national trend which has seen heavy losses for both the Conservatives and the Labour Party.

Test Valley Borough Council leader Phil North has paid tribute to the Conservative councillors who lost their seats in yesterday’s local election. Blaming the “national situation” he said, “The ‘none of the above’ vote has shot up right across the country so it’s unsurprisingly that it has happened here too – which has meant that we’ve lost some incredibly good councillors.”

“I’m pleased though that we’ve retained control of the council and we will crack on with our ambitious plans to rejuvenate our town centres.”

The Andover Alliance is now the second largest party in the town. It is widely believed that they will see further success later today as the town council seats are announced.

Party leader Richard Rowles told Andover Radio, “The real heroes are the voters who have now overcome a lifetime of not voting or voting for the same party and they have chosen to vote for change.

“For far too long we have elected people who have spent decades looking at their feet and not at the horizon.”

Polling expert Professor Sir John Curtice told the BBC last night that it would be the smaller parties celebrating today. He said, “One of the major features of the 2017 general election was that, between them, the Conservatives and Labour dominated the election, winning over 80% of votes.

“It now looks as though the key message from voters to the Conservatives and Labour is ‘a plague on both of your houses’, as they find themselves losing both votes and seats on an extensive basis.”

Conservative Iris Andersen retained her seat in St Mary’s ward, telling Andover Radio, “We must all get on and do the best for the people of this town.”

Surprise losses for the Conservatives last night included Sandra Hawke and past Mayor of Test Valley Jim Neale in Millway Ward, the long-standing Tory councillors were ousted by Alison Watts and Christopher Ecclestone for the Andover Alliance.

The count for the seats in Andover town council will begin this morning at 11am.