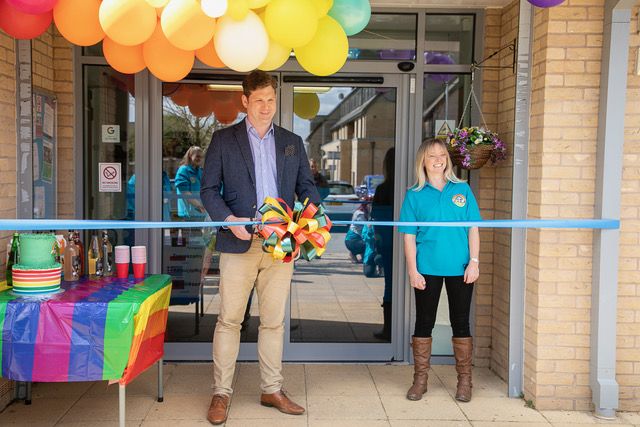 On Friday 16th April Councillor Phil North joined Alison Dennis director of Finkley Nurseries in officially opening the new Finkley Nursery at Augusta Park Centre, East Anton. This new 50 place nursery will occupy its own section of the centre. There has been a substantial investment from Finkley Nurseries in turning this location into a great facility for the children attending. Parents have commented on how open and light the setting is and how they can’t wait to send their children to have fun. Facilities such as a soft play room and an ICT area which has a 48in tablet table for the children to use have been professional installed.

Alison Dennis said a few words where she thanked the Augusta Park Community Association. Alison acknowledged that with out their support the urgent need to open a nursery could not of been achieved in the 4 months it has taken. Alison went on to also thank everyone who works for Finkley nurseries for helping with the opening.

Cllr Phillip North leader of Test Valley council declared the nursery open. He thanked Finkley nurseries and the team in “mobilising this nursery so quickly” he went on to say “its going to be a huge asset to the community, parents and to the children”. Finally Cllr North said it was “great that the Finkley nurseries are so unique in the area”

This is the 3rd Finkley Nursery to open. The other nurseries are at Weeke in Winchester and at Finkley Down Farm. In total the company employes over 35 staff members all from the local towns and villages. At capacity the company looks after 130 local children. The children attending the nurseries visit Hampshires award winning attraction Finkley Down Farm. They even get to visit when the farm is closed to the general public. This means they can help feed all the animals and to collect the eggs. This is alongside having fun with all the attractions at the farm park.